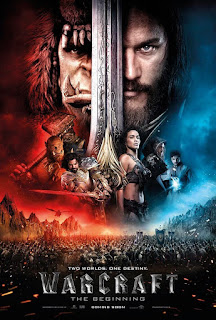 Well, the effects are good...
I had zero interest watching this film prior to this month, yet somehow after watching this, the film left me a bit heartbroken. While it's true that I've never actually played the game this is based on, Warcraft has a pretty interesting world, it just never gets past explaining it's own mythology. Much like the previous film on this run of bad movies, this is unapologetically a fantasy film, it takes it's world at face value without mocking it, unlike that last film Warcraft never becomes fun because it wants to make sure you get what the green magic is. By the end of this I was bored, but I'd be lying if I said I didn't want to be bored once the film started playing, it's just such a beautiful and interesting world, if only the film let that be the point but as mentioned before, the explanation of why, is the point.

Where the film is strongest is with the orcs. Obviously part of why the film works so well with the orcs is because the effects on them is impressive, but they're also just more interesting than the humans. I wanted to learn more about orc culture, I wanted to see more of Durotan's struggles as a chief, I just wanted their story, but instead we're supposed to root for the humans (largely) because reasons. In fairness the humans aren't awful, their story is just nothing special for fantasy films, which makes the boring story feel even more boring.

I can't say this is by any means the worst movie I've ever seen, but it's definitely a major disappointment. Going into this one I had no hopes, but upon leaving I find myself saddened that the passion that's clearly in this amounts to a misfire. There's a love for the material, a feel of fearlessness and embrace of the weird aspects in fantasy, yet what ends up taking so much attention is what makes the green magic bad; what a pity.