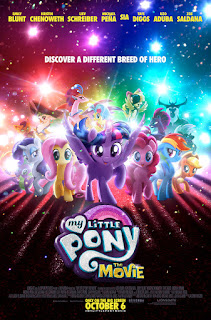 It ain't torture till I get PTSD from a stalker I suppose.
I've mentioned it multiple times, so I won't dwell on it, but yes I was stalked over not liking this show, which oddly enough turn dislike into hatred. So why watch My Little Pony:The Movie (2017)? Quite simply, because it's time to let that hatred die, plus the whole point of January of Suck is to punish myself, so this fits the bill. Has time allowed me to get over my own hatred of this show? Kinda, I still cringe at the sight of it, but I'm less bothered by the existence of it. Is this the actual worst animated feature of 2017? No, but it does come close at times to The Emoji Movie. Have I forgiven my stalker? Never, but I can say I'm no longer blaming the show or fandom as much As I used to, so progress I suppose.

Just going by the film, the biggest flaw is in how generic it all is, I remember feeling this way about the show as well, but here it's to a much worse degree. Ever seen an adventure film before? Congrats you know all the major characters, you know all the beats, you know the twists, everything. By the time we got to the "sad, hero breaks away from the team" sequence, I just questioned why this sequence had even happened beyond "because films have these scenes". Don't get me wrong, I understood where the main pony (don't you dare make that stupid pun) had screwed up, but it wasn't like the other ponies didn't mess up at any point, in fact the rainbow one (I refuse to say their names) screwed up even worse earlier by making the obvious mistake of alerting the bad guys of their location. All these things happen just to fill in the gaps for a standard script, even the film's main villain (who turns out to be a sidekick) seems to only be redeemed because she is not the villain in charge; there is a tragic story to her that is admittedly understandable, but it just makes her personality have a drastic change by the end, it never feels earned. This is a generic kids film, which makes it a shame that this was the first major 2D film in the U.S. To hit theaters in years.

Worse than the generic plot is the generic cast and songs. I like a lot of the voices here, you can definitely tell the actors tried here (Emily Blunt is the MVP here, it's just a shame her character isn't as fun as the performance she gives), but the characters are so bland and lifeless. Every time the main ponies interacted I didn't feel their comradery, they're more like a collection of stereotypes of female characters, than actual characters. Even the main pony has way too few moments to justify having a sequence where her friends question her choices, these characters are just cut outs of characters we've seen elsewhere. I found the only exception to this was the white pony, she's a typical rich/fancy girl type, but that they still make her a kind character, rather than the jerk of the team, which earns a few (almost) chuckles because she does feel a little fresh in that regard. The film though, never bothers making these characters interesting, we get cowgirl pony, pink pony, rainbow/athletic pony and shy pony, who all barely add much to justify the team. All of this isn't helped by the music being so bland and forgettable that I can't even remember any song besides the opening song, which is just a pony version of a song I didn't like all that much to begin with, so yeah it's not good.

Look, I get it, this isn't for me, it never was going to be, it's for very little kids and the diehard adult fans, but they could've tried harder to make this less of a chore to sit through. There's some interesting art in the background, it's pretty to look at, but it gets bogged down by the animation which is just too flat, sometimes even stiff and ugly. It clearly looks better than the show, but it still is working off largely boring characters (design and story wise), so if you expected the return of 2D animation, you're better off looking elsewhere. If you enjoy it, that's fine, I get it, but I hated this movie, the messages are unoriginal, as is pretty much everything else. If you're not a huge fan, congratulations, you won't have to watch this, it's not like it's even worth it when it lands on the bargain bin where it belongs.