SCOUT'S GUIDE TO THE ZOMBIE APOCALYPSE-JANUARY OF SUCK 3 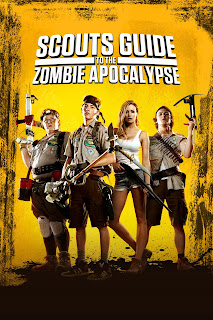 The title is the funniest thing about this, there, you can skip it.
There's really not much to talk about, yes even in these reviews that I don't intend to get in-depth with; this is a dumb movie, but we've seen it done right elsewhere. They're losers, there's zombies, it's comedic and the zombie stuff is never explained, hooray I guess.

Look my point is, zombie films have been parodied to the point that they're just as ubiquitous as the serious takes. This isn't to say you can't make good zombie comedies now, after all Shaun of the Dead didn't stop Zombieland, or Paranorman from being good; in fact I still want a Lollipop Chainsaw movie adaptation. The problem is, how many people are even trying anymore? When we've gotten numerous parodies (even Disney Channel is doing one!) it's maybe time to put the genre to rest.

Outside the zombie stuff, this film features common things found in teen-raunch films, stuff like the three friends, one's a loser, the other is a horn dog, while the lead is a leader. There's an occasional chuckle from that all, especially with how two of them calm a zombie down, but it's honestly not worth your time. Scout's Guide to the Zombie Apocalypse isn't horrible, but it's worthless from beginning to end.