GHOSTS CAN'T DO IT-JANUARY OF SUCK 3 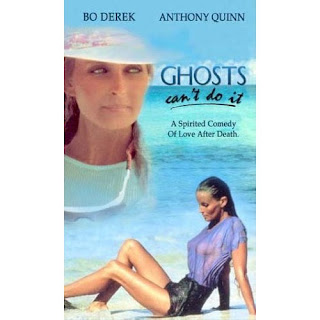 PRESIDENT ORANGE CRAP FACE APPEARS IN THIS MOVIE, is what most people say about this.
In what may be the new worst movie I've seen in any of these runs, comes Ghosts Can't Do It, a "comedy" about Bo Derek trying to bring her dead husband back to life. It's absolutely boring, incomprehensible at times, as well as confused about it's own message. This should be a dark comedy, after all the goal is to murder a person for her husband to possess, but it plays everything safe which is odd in a movie that doesn't steer away from nudity. If anything, this movie proves that the 80's weren't as coke-filled as I was led to believe, because while I assume someone made this while snorting coke, I doubt that portion in the process went past the treatment stage. For such an insane idea, the movie plays everything as if it were a dull rom-com your grandparents would watch because it's "nice". Also did I mention, Donald (terrible business man) Trump appears here? Cause he does.

Anyone who's ever brought this movie up has mentioned two things to me, it's terrible (I can confirm) and it features Donald (grab 'em by the pussy) Trump, which is true but that part is exaggerated by most people. While it's true that Donald (future leaks confirm he shouts "Ivanka!" Every time he fucks) Trump appears here, it's a one minute cameo at best, sure it's not necessary or believable, but it's not even the film's worst stretch that people have built it up to be. The scene in question is Bo Derek, trying to save her dead husband's business from the suave, evil, great at business Donald (only evil actually) Trump, which ends up being a pointless diversion to set up a love triangle that never goes anywhere (seriously Bo, should've gone for the other guy who loved you). Even stranger is that the film is so proud of it's short cameo, that the credits even state "that really was Donald (wants your kids to die/lack an education) Trump", I took liberties in relaying the message obviously.

So when the movie is Donald (been racist since he denied black people in his buildings decades ago) Trump-free, what exactly makes it bad? As stated above the comedy never goes full dark, despite the characters trying to murder some rapist to be together again. All movies have the potential to be good, this one ditched it and instead becomes an excuse for Bo Derek to vacation on the beach, occasionally she talks like a crazy person, which no one ever attempts to do anything about and her ghost husband appears in a weird, annoying filter. The film doesn't even try to have fun with it's title, which yes, is referring to ghosts fucking, which is a shame, because while I'm not a big fan of sex comedies, I would much rather watch a movie about Anthony Quinn desperately trying to fuck as a ghost, have him possess a vibrator or something, I don't know you already made Donald (shithole) Trump be a special guest, not like you can go lower.

Bottom line, Ghosts Can't Do It is a painfully dull movie with a weird premise that is somehow stupid and boring. Shit all you want on President Obama, Republicans, but it's Donald (I'll stop being political when he stops being an awful living thing) Trump who was a featured player in one of the worst movies ever made.