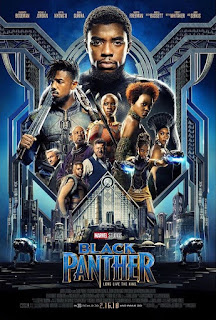 It’s only the second month of the year and already we have a strong contender for best picture, seriously.

At this point you already know the talking points, here’s a hero most people never knew much about, Marvel makes a really good movie, by the end, you’ll hardly believe this wasn’t already a super popular character; Black Panther is another one of those. So then, what can I say about this movie that I couldn’t about the other films, well quite obviously it’s an important movie for black people everywhere. This wasn’t just another Marvel film, it was a movie for an audience that has desired to be represented by a big blockbuster, I can only say that I hope they love it and I wish they find the same joy I found in seeing myself in Coco.

You’re probably here wondering when I’ll explain any Easter eggs, continuity, all that good stuff, well sorry, but there’s no spoilers here. Thinking back to it though, part of the charm I found in this film is that there’s hardly any callbacks, or shout outs to the other films, at least from what I noticed. I’m not saying there aren’t any references, you can certainly find a few, but what’s readily apparent by this point is that Marvel knows how to slip them in so well that you’ll barely notice them, unless they factor into the plot. I’m not against fan service, but it’s great to see the studio leading cinematic universes isn’t being lazy about it.

You’ve probably already heard the comparisons to other various franchises, including some that Marvel owns, but surprisingly, this movie is among the more unique superhero origin stories to date. There’s some pretty standard beats you find here, but the turns taken to reach the climax are surprising and unexpected, there’s a lot of great stuff here.

By the end, we get a surprisingly strong political movie that is entirely about acknowledging how messed up it is that Wakanda has kept to itself for centuries. No spoilers, but if you wondered why slavery and racism still exist in a world with Wakanda, don’t worry the movie comes to harsh terms with that. From there, you can probably guess why some on the Alt-right (nazis) are trying to co-op the movie, but trust me, T’Challa is no Trump, outside of not being a blithering idiot, T’Challa is a kind, respectful leader. Back to the film, yes it’s a movie about accepting that one cannot stay in their own borders over fear of losing power, which makes some of the film's big moments incredibly relevant, which thankfully is a strength to the film.

Everyone in this movie deserves a shoutout, EVERYONE. Chadwick Boseman and Martin Freeman return after their short appearance in  Civil War, and they still feel so refreshing, perhaps more so than in there. Also returning is Andy Serkis, playing the villainous Klaue who is a ton of fun. I know a lot of people will love the  women here, Danai Gurira, Lupita Nyong’o, Letitia Wright and Angela Bassett, all play various women in T’Challa’s life,  a guard, a lover, his sister and mother, all amazing, strong, intelligent and fun women to follow, I can only hope they get their own spin-off. I especially wanna see the sister, Shuri, work with Tony and Rocket soon. Most people think Marvel villains are often weak characters, I disagree, I’ve found quite a few that are at the least fun to watch, but I’m confident in saying that a lot of people will like Michael B. Jordan’s Killmonger, a complex and deadly villain, so much so that you forget how edgy his name sounds. Before we move on I want to give a shoutout to Winston Duke as M’Baku, in a film filled with scene-stealers he was probably my favorite.

I can tell you the action is great, or the writing is strong, or that the music is wonderful (all true), but the truth is this movie is great because of how important it is. Black Panther is not my favorite Marvel film, but it feels like the one that will matter the most in the future, there’s an audience out there that is finally getting the movie they deserve, they’ll be happy to know it’s amazing.