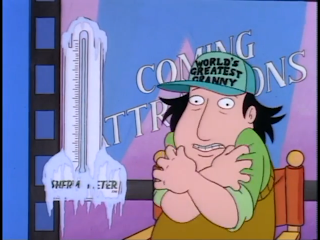 A critic reviewing The Critic? Sounds like a meta YouTube video.
I’m a huge fan of The Critic, it’s one of my favorite animated shows and I’ve always wanted a true comeback for it, though it seems it’ll never happen, I can only hope. When it came time to deciding what I should review next, I figured why not this? It was a short series, I loved it and who knows, maybe I might convert more people into fans, who knows? In any case I’m reviewing the entire series, starting with the first episode which is a fun introduction to what this show is about.

If there’s anything I can say that’s bad about this episode, it is that it’s very apparent that this is an introduction episode. Our main character Jay Sherman is introduced, we learn about his family, friends, co-workers, etc. in such a short span of time that it doesn’t leave much room for the show to breathe. The upside is that we still get a lot of funny gags, the downside is that a lot of it just feels so inorganic. This doesn’t hurt the episode, but I do wish some stuff would be revealed more gradually; much as I love Jay’s boss, Duke and his opening line, I do think it would’ve been better to introduce him in a later episode.

As for the plot of the episode, it’s a cute way to start the show, but I have to wonder how often, if at all, actors actually sleep for reviews? Jay meets an actress of an upcoming action film, she seduces him, which leads to everyone questioning her intentions, all while jokes follow. It’s hilarious and despite the ludicrous set-up (can an actress prove me wrong here?please) it ends up being a good way to get people on board with the premise of the show.

If you do watch the show after reading this, you’ll notice it’s an early adopter to a comedy style Family Guy has popularized, cutaway gags. Much like that show, this one uses them for flashbacks, unlike it though, the gags tend to hold more connection to the show, in fact, outside the flashbacks, a lot of the cutaway jokes are movies Jay critiques, making them feel more organic to the show. A lot of these jokes are among the funniest in this episode, with the Home Alone gag being one of my favorites of the show.

I love this show, it’s funny and a real gem, this episode isn’t perfect, but it’s a good way to give people an idea of what they’re watching. Definitely watch this show, it is an under appreciated comedic classic.