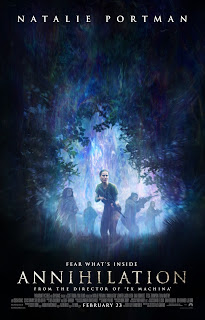 Yet another amazing film this early in the year, hope this is a trend for 2018

Ex Machina was an amazing film from a few years back, smart with a chilling ending, it was a film I've thought much about since. Director Alex Garland has returned with yet another chilling sci-fi feature, Annihilation, a loose adaptation of a novel with the same name (at least I've been told). It can be very hard to replicate success, so much so that I was reluctant to believe this would be another great film, I had hope, but I never considered it'd live up to that hope, thankfully it exceeds my expectations. Much like his first film, Annihilation is not holding back anything, it's a smart film that knows the only thing scarier than a monster is the mind.

The feature focuses on five women embarking on a mission to find the source of a mysterious area known as the Shimmer, a strange spot that has up to this point killed everyone who's gone within. Natalie Portman stars as Lena, a former soldier who finds herself involved when her husband, played by Oscar Isaac, seemingly returns from the Shimmer after missing for a year. Along with her are Jennifer Jason Leigh, Gina Rodriguez, Tessa Thompson and Tuva Novotny, all playing various types of scientists, going into the Shimmer to figure out what's gone on. Right out of the gate things go bad, as the five realize that they're forgetting various stretches of time, the place is mutating the landscape and even the creatures are just... off.

I'm not going to say much more about the plot, because the less you know, the better, this is great storytelling after all. I will say so much of the film left me uneasy and uncertain, always guessing about what would come next, it truly is a frightening story to think about. For many, this may even feel like a creepypasta (one of the better ones) brought to life on the screen, as it does feel rare to see a movie, especially a modern one from Hollywood, that isn't afraid to scare you with what plays in your mind, rather than just creating monsters, loud noises and gore; thought the film does employ that, it knows how to take advantage of that.

Part of the way films like this succeed, is based on how good the cast sells it. Thankfully, everyone involve brings in their best, whether it's Oscar Isaac being quite strange, possibly empty, or Natalie Portman playing the scarred witness to all the madness, I found myself intrigued to see where it all headed. A particular stand out for me, was Gina Rodriguez, she enters the film quite playfully, you'd expect her to be the fun member, but as we quickly learn, the Shimmer changes so much, as does Gina's performance and it is frightening, without giving much away I haven't been this terrified by a performance in quite some time. If there is a weak link, it's Tuva Novotny, she's not bad, it's just the film doesn't give her much to do, besides being someone Portman can talk to for a few scenes. As a whole, I found myself hooked on what was going on because of the cast, which is why I hope more studios consider giving films more diverse casts in both gender and race, there's a lot of great performances you can miss when you only look for white men as leads.

I loved this film, from it's cast to the strangely beautiful, yet creepy imagery. While most people would avoid going bright for their horror, I'm glad this film embraces it. Everything looks beautiful, but we're never left to feel comfortable about what is seen, pretty flowers, colored like something you'd see in a little girl's notebook are always uncomfortable because we aren't quite sure if they're an effect of the terrifying aspects of this strange world.

One last thing, the studio execs seem to want to bury Annihilation, which is a shame because Annihilation is an amazing film. Word's gotten out about the studio intentionally trying to make this one a failure because of Garland refusing to alter the film to make it connect more to the "average" audience. It's insulting to know the studio is being petty over the director's vision, which is why I feel you should definitely see this in a big screen, maybe you won't make a dent in the box-office, but this is a great film that should be watched anyway. Studios shouldn't demand films be made less intelligent, Annihilation is fantastic because it is smart, you deserve that.