IN SEARCH OF THE WOW WOW WIBBLE WOGGLE WAZZIE WOODLE WOO!-JANUARY OF SUCK 2 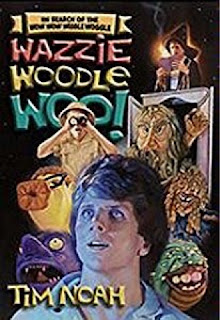 So here we are, the end of January of Suck 2 with In Search of the... eh you read the title up there, I'm not writing it again.

Sooooooo this was something? I was bored honestly, as the shortest film, it somehow also felt like one of the longest for the entire month. A fifty-four minute children's film about a grown man pretending to be a kid in his room looking for... what the title says, and that's it, you get some music, some set changes in the room, cheap puppets and nothing else. A boring feature sure, but it is meant for young kids and in that regard I guess it's harmless but I'd still recommend other movies over this, there are good kids movies, why dump them with trash just because it won't hurt them? On top of that I'm not even sure young kids would like this, I'm sure I would've been bored even when I were five.

The only real positive I can say is Tim Noah can sing pretty well. Every song in the film sucks, that much is true, but I can imagine with better writing, as well as a better tune, Noah would be able to provide some great songs. As is, the music is best at keeping you slightly awake through this boring mess, Noah just isn't too charismatic otherwise.

I guess I should be happy it's not the worst movie I saw all month (it would probably crack the top ten though), but that's not exactly a major success. I was bored, sure, but I wasn't exactly annoyed enough to really be bothered as much as some other films I witnessed, sorry it's just not an effective movie in either being entertaining or being awful, it's just a slow, boring but harmless movie. I don't recommend it, but I won't force you to not show your kids this movie... It's still bad though.

And that was January of Suck 2, it wasn't as bad as last year, but that may be the result of of so many awful films breaking me to a point where I just feel dull to a lot of issues. I still thought a lot of these movies sucked, so expect a "worst" list soon along with a collection of last year's "reviews", for those who've yet to see them. Thanks for reading, I still had fun doing this and assuming we survive under President Bigot Lorax, expect January of Suck 3 next year.