FROM JUSTIN TO KELLY-JANUARY OF SUCK 2 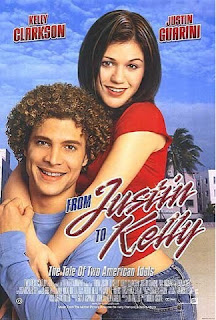 Look, everyone knows this movie sucks alright? I have nothing to add. Justin and Kelly are both bad actors, this was clearly rushed for profit given the hype around these two, it bombed, no one cared.

American Idol, along with Fox, probably regret doing this, as they should given the mess. The story is non-existent, it's just an excuse for pretty people to come together and say "I like you, you're pretty" while the movie is poorly shot and choreographed. There's nothing of worth, not even for unintentional laughs, I promise you, you will be wasting you're time on this. Also the music is bad, so literally no saving grace.

What do you want me to say? Everyone knows From Justin to Kelly, was a bad idea. Skip it, let's go to the next movie on this list.