DOWN AND DIRTY DUCK-JANUARY OF SUCK 2 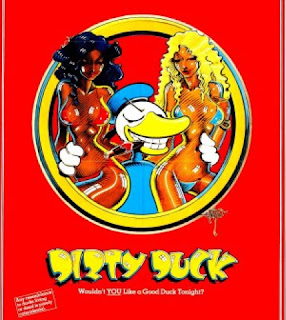 Today's January of Suck entry is an adult animated feature, so please keep the kids away from this. Never heard of Dirty Duck? Well that's cause it's actually known as Down and Dirty Duck, wait you haven't heard of that either? Well trust me, you're not missing out.

Animated films aren't known to go adult, some have of course, but pretty much any that have, are forgotten at this point. While this may seem like a loss, considering most "mature" animated features decide to go pornographic, I don't find this to be a big deal. I don't hate sex mind you, I just think it's boring that the default for animated features to be deemed for adults is to have a ton of sex. So how's this one? Pretty awful really.

The plot? Willard is a lonely horn-dog of a man, after an encounter with a strange woman leaves him with a talking duck, Willard and his new friend... The Duck, are left to navigate the world. With the help of the Duck, Willard may finally find his way to a healthy sex life, while also finding himself a good duck for the night.

There's a lot of filler, none of it is really funny, in fact it might not be intended to be funny, maybe it's just supposed to be titillating, but then none of it is drawn or animated well enough to be that. I know it's meant to be cheap, in fact that was the original title, but without the attractive art, or humor, we're left with so little to really enjoy. I probably wouldn't have minded this as much if the story were interesting, but again, the movie wastes a lot of time with a bunch of go nowhere scenes.

If there's one decent thing here, I'd say it's the music by Flo and Eddie (who also star in this) for the film. It doesn't make this a must-watch feature, but I liked it enough that the movie didn't drag as much as it normally would have.

So if you just want to watch something naughty that's also a cartoon I'd... Still recommend other features over this, but at the very least the music is cool. Skip Down and Dirty Duck, you can get a better duck elsewhere.