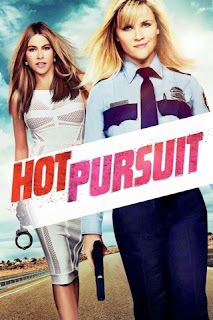 Sofia Vergara and Reese Witherspoon star in this buddy comedy, at one point they make out and it is neither funny or hot, move along.

I was honestly not going to get around this one this time, I had different plans, but it turns out I couldn't get around to watching the planned film, so a dart was thrown to what was available, yippie.

Hot Pursuit is a bad film, probably not as bad as I was lead to believe (7 percent on Rotten Tomatoes) but still bad all the same. I mean at worst this is an unfunny comedy, I just didn't laugh, but I wasn't cringing all throughout, so yay? The leads could make for a funny pair I thought, the material just wasn't any good. As a road trip movie about a cop and her fugitive escaping the bad guys, this could've been better, sure, but I didn't really find much to be angered about. It's just not entertaining, but at least it doesn't drag in its short run time.

There were only two things that really bugged me, one was the third act, which felt like a different movie, let's discuss that before we go on, because it is the bigger one, at least in considering the movie itself. Admittedly I'm about to spoil this film, but realistically, who cares? So, in the third act our leads are separated because Vergara decides to murder her husband, who was the catalyst for the whole movie, which isn't necessarily a bad place to go, but suddenly going there feels, random, granted it's short, but suddenly we find out Reese's boss is evil and there's all these gags about Reese sneaking in, it felt pointless really. Wouldn't it have been better if Vergara planned to kill him during his trial? (Which we don't see because he just goes free) It's just to pad this out I guess.

The second thing was an odd gag that feels insulting when considering the real world. Reese is known as a screw-up for accidentally hurting some guy with a taser, sure that's bad, but given how cops have shot and killed unarmed people for no good reason, yeah this is a really bad joke, especially considering that this movie is recent enough to have at least considered the notion of "hey, she screwed up, but some of the real cops have done WAAAAAYYYY worse, maybe let's not do this joke". It's even more odd when you consider the rest of the movie treats her as a decent straight-arrow cop.

Look, it's not the worst movie I've seen, if you want a movie where a female cop teams up with a fugitive I'll recommend Zootopia over this any day, but I just don't think it's as bad as I was led to believe, though still bad of course.