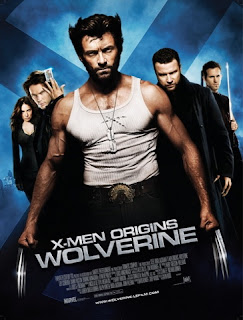 IT'S THE MOVIE THAT INSULTED DEADPOOL!!!! Oh and it's also the sum of the worst things about the X-Men franchise.

I never got around to this one (duh) and had only heard the tales of it's awfulness, now having seen it, yeah it's pretty bad. I don't necessarily think it's the worst superhero movie (hi Bruce and Clark!), but it's up there, it definitely is. From bad CG to poorly done action sequences, this was one massive mess, I'm not surprised that it's considered to be the lowest point in the series.

Before we go any further, let's address how they ruin Deadpool, because it is one of the worst things here. Yes, the design is all wrong, yes, he is given powers that he does not have, but the worst thing is the butchering of the character, the sewn mouth. As a character, Deadpool is by all accounts a smartass, a character who never shuts up, that's his charm, so in adapting him for the big screen, what they did is just a complete insult, one of the worst, if not the worst translation from comic to screen. Deadpool being turned mute is like making a Popeye film, where Popeye neither eats spinach or fights, it's insult to the character.

The film as a whole though? Yes it is still bad, as mentioned before, it is the sum of the worst aspects of the franchise. Mutants are introduced for no reason but to show off mutants for the fans (Gambit appears for no reason but because fan-service, admit it), which slows down the film by so much, a better film would've lessen the amount we see. Wolverine leading feels like a joke considering he was the lead in the prior films, so the added focus does nothing in this one. The continuity is all over the place, though I suppose that no longer matters, and yes the effects to make Patrick Stewart look younger Suck so much.

If you're looking for a fun action film, I can't recommend this either, there's nothing fun here, easily the worst in the franchise. It's not that the action is badly shot, it's just standard, nothing is special, the most memorable action shot is Wolverine walking away from an explosion, but that feels like something you'd see in a parody, which really doesn't help it.

But hey, Hugh Jackman is good as Wolverine, which is standard right?

Look, everyone knows X-Men Origins:Wolverine is the worst one, I agree, the action sucks, the story sucks, the use of mutants is annoying, and yes fuck them for what they did to Deadpool (I'm happy knowing they redeemed him with his own movie), skip this piece of shit.