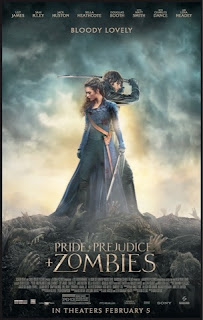 Was anyone even really interested in this enough to warrant a movie? No seriously who the hell was still asking for this?

I don't get movie studios jumping on fads, for the most part none ever work out well for anyone, the rare cases that do, usually move far enough from the fad to feel unique. That's what this movie is, a fad, one that was long burned out by the time we got this movie and it shows, this movie isn't so much a joke as it is a snoozefest, a boring sit through with boring action. Based on the novel of the same name, Pride & Prejudice & Zombies, is a gag, it's meant to be, the problem is it's not a funny gag, at all. Since it takes everything seriously, the original story is altered to include zombie killing, everyone is aware of such things, thus everyone knows how to fight them, losing the potential joke there. Of course it won't matter because this was made to cash in on zombies, a market that isn't especially marketable anymore.That's the main flaw in fads, by the time studios finish their cash in, it is too late, if not they contribute to the demise of the fad, every single time.

One of the biggest issues here does come down to the rating, at a PG-13, so much is toned down, give me the gore, the violence, the grit, this is a zombie feature, don't tone it down, make it as exploitative as you can, this should be a nasty good time, instead it's just a teen action film. The approach of it is just wrong, what would make the gag funnier is if the characters weren't aware of zombies, like if the movie started out as just Pride & Prejudice and then out of a nowhere a zombie attacked, that would be funny, odd but funny. Since the characters are prepared, that means all fights are obviously prepared, which loses the fun of the idea, imagine if they all had to improvise in battle, that would make things more insane on top of the humor, how do the girls fend off zombies? Who knows, but the possibility there has got to be more interesting than this. Though again, it's the rating that proves to be the fatal blow, it means the violence and fights are limited, without a creative team, that means the kills are just boring, standard and tame, losing anything insane about the concept.

I can't recommend this one, at all. The possibility of this working is there, but as is you can tell this was just a fad that no one needed to bring back, and with the failure to attract audiences, it's safe to say it won't be back soon.