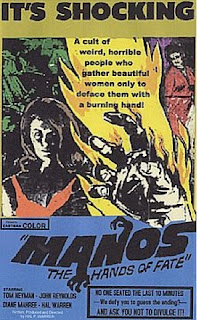 WHAT THE FUCK EVEN IS THIS MOVIE!?


Manos:The Hands of Fate is a movie widely regarded as the worst, from a technical aspect, I'll believe it, from an entertainment standpoint, I laughed. The movie is a low-budget independent film about a cult that worships a being known as Manos, but trouble arises when Torgo, The Master's servant, brings in a family that has lost their way.

Yes, MST3K mocked this film, but I've never actually watched that episode, so it was a treat to watch this on my own. Any time I noticed an obvious editing flaw, a piece of poor dialogue, or story beats being dropped or just never addressed I would laugh, this movie, the filmmakers, as well as the cast did not give a fuck, the movie is all the richer for it.

There's an obvious passion that was put in this, it just seems it didn't work out. All the actors seem committed, the script just wasn't good, along with the editing, making for a film that's awkward, but committed to it's own madness, I loved it.

I wholeheartedly recommend this. Yes, the movie is not at all well made, but the charm lies in how poorly made this all is, besides, not watching this, means you miss out on Torgo, one of the best poorly written characters ever.