THE NUT JOB-JANUARY OF SUCK 2 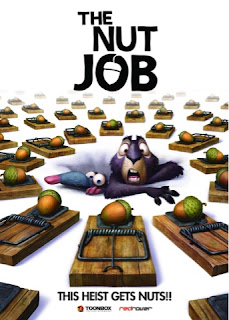 
Okay, you there, yes you raising your hand, I know there's a reason why Psy cameos in this film. The Nut Job, was partially produced and animated by South Korea, to honor this fact, the animators felt like honoring their nation by using a hit song from them, in comes one of the biggest YouTube sensations. Even knowing that, the film uses the song so randomly, that it feels like a studio forced them to make the movie more "hip" with a big meme, so failure on their part if they wanted it to feel like they were honoring their nation.

Going beyond that, this film is a collection of kid movie tropes done wrong, including a "liar revealed" scene, which isn't really revealing a liar, making the lead that much more unlikable. I'm not kidding, I understand a lot of movies like to kick the hero down towards the third act, but if you must go with a "liar revealed" scene, make sure your hero is lying, cause Will Arnett's Surly, ends up just insulting his friend, for no reason, rather than even try and explain the truth, this isn't changing the formula up, this is just dumb.

There's also this subplot in the film regarding humans, which is also weird. A group of thieves (modeled after 1920's mafia members for some reason) are trying to pull off a bank heist, while the leads pull off a nut heist (fuck you movie, I'm not using your title to describe the stupid ass plot), which never connects in a reasonable way, which is odd considering the humans and animals do eventually interact. Admittedly, I probably would've preferred watching a film focused solely on the humans, but I only feel that way because they don't have the annoying jokes the animal half carries (including characters randomly saying nuts, because get it?) meaning even that film was bound to suck.

Back to the lead, he really is unlikable, even for a redemption arc, at least this movie's idea for a redemption arc anyway. Outside of constantly insulting his own friend, he is never fleshed out enough to say he has a "heart of gold" underneath it all, in fact, we never learn why he is so selfish, making the park's leader, Liam Neeson's Raccoon, justified in banishing Surly. Of course the movie then creates this bullshit to villanize Raccoon, which might've worked in a smarter film, but here it feels like something they pulled out of their ass.

Also, yes the animation is unimpressive, but you could've picked that up if you saw the trailer. Skip this awful movie, sure it's not as bad as other animated features, but that's not a mark one should be proud of.