PLAN 9 FROM OUTER SPACE-JANUARY OF SUCK 2 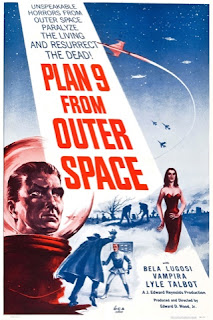 It's another one of those "so bad it's good" movies, neat!

Plan 9 From Outer Space is often in "worst movies" lists, but is it really that bad? Technically, yes, the effects are bad (then again so were a lot of other effects back then) and the acting is laughable, I mean, I've seen grade schoolers with more talent. So do I agree? No, this movie is pretty funny, plus you can tell there was some passion in the work, it just kinda went bad somewhere along the way. Ed Wood really was some kind of "master of unintentional fuck ups" wasn't he? I mean, just wow, you can tell there's a much bigger idea with a lot of heart at play, but the actors and writing just bring it all down to something hysterical.

What were plans 1-8? Does it even matter? Apparently raising the undead was the way to go, that's impressive, I mean not really, but it's funny. What's funnier is that before ever watching this I had mapped out a whole film script with aliens carrying out a similar plan... could I be Ed Wood reborn?

Jokes aside (though seriously how odd) I did find myself entertained here, sure not in the intended way, after all, the plot was not captivating, but at least I wasn't bored or angered. The joy from hearing lines like "Future events like these will soon come to you, in the future" is immense, especially when the delivery is so profoundly wrong.

I recommend Plan 9 From Outer Space, the "worst" movie ever made. You'll love it too, I know.