GOD'S NOT DEAD 2-JANUARY OF SUCK 2 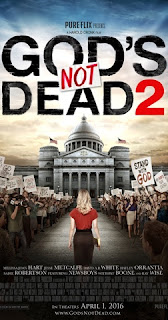 I hate myself for this, but I kinda enjoyed this one.... WAIT DON'T LEAVE! This is still bad.

If any film was going to be worse than God's Not Dead, I assumed it would be this one, God's Not Dead 2, so I am shocked to say, I actually found myself entertained. It's not good mind you, there's just some really bizarre over the top choices made here that is so laughable, how could you not find joy in this? Sure, the message is wrong headed and hurtful, but let's be real, if you take everything this movie has to say to heart, you probably aren't worth listening to.

Can someone enjoy this film unironically, while not being a total dipshit? Sure, they probably only like it cause it says God though, so you know, they probably couldn't care less about the rest of the bullshit, so kind of like a kid who likes something because it's colorful.

Yet, I enjoyed this film, the actors this time are much more over the top, the story is a joke (Teacher goes to court for saying Jesus in class, the ACLU are Godless heathens), Ray Wise is pure, blissful evil, and a white guy "White-splains" a black woman on Martin Luther King Jr. Truly, this film is a treasure of bad choices turned unintentionally hilarious.

Oh by the way, yes I am not fucking with you, a white guy decides to go all "actually" to a black woman about MLK Jr. And the scene is hilarious, oh the guy's a moron, the filmmakers don't realize how offensive that ends up feeling, but I laughed. I simply cannot believe the film decided to go through with this scene, I wish we could hear that woman's thoughts as this played out, it's almost like when a woman is told by a man what choices are right for her body, insulting? Yes, but laughable to witness, the kind of thing that makes you say "this asshole" to anyone nearby.

The film plays on that level of stupid. The bad guys are all practically twirling their mustaches, and if I'm completely honest, they look like they'd be the guys who would worship Jesus as an excuse to insult others in real life. It's all so moronic, the characters even go far enough to act like they're the most persecuted group in history; that SNL parody about God being straight feels pretty fucking accurate. This film is beyond stupid, beyond help, but at least we know Ray Wise is mad to find out that God's not dead.

In a strange turn of events, I'm not mad, this movie was an unintentional riot. It's not perfect, in fact it's still hatefilled trash, but God's Not Dead 2 is definitely worth checking out for a laugh at the expense of morons who buy this crap.