ALICE THROUGH THE LOOKING GLASS-JANUARY OF SUCK 2 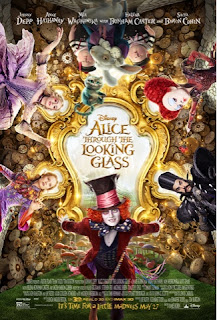 Okay real talk, yes, this is better than it's predecessor, I mean, it's not like that was a high bar to cross to begin with, but yes Alice Through the Looking Glass is a sequel that is superior than the original. There's a much more vibrant color-palate this time, the effects are better, even if a lot of it is still obviously CG, while the actors seem to be having more fun this time, especially newcomer Sacha Baron Cohen as Time, who steals every scene he is in. The director was clearly a better fit for this than Tim Burton was, but the problem is, this movie just can't disconnect from Tim Burton's awful movie.

Admittedly, one of the film's biggest issues is that it feels like a Disney straight to video sequel, a majority of the characters are back, but don't contribute much, the plot is more sci-fi, than fantasy, and it just never feels like an Alice story. As an original story this might've fared better, but all the baggage that comes with this being a sequel, makes it feel too odd and different to be a proper addition to the series. By the time the movie gets into time traveling, I just felt confused that Alice, was in a time travel story like this.

Yet I was still more entertained here. Maybe it's the lack of them shitting on actual material from the novels, or maybe the actors were much more on top of it this time, but I was honestly more intrigued by where this film was going, even if it wasn't great, or even good as we got there, I felt some engagement. Which left me puzzled, why did I still feel this was bad? Aside from not being rooted to the novel, or featuring characters that have little to do besides saying "we're back" this sounds like a decent film. Well as mentioned before, this stays connected to Burton's film.

Every time the film seems to go all in on its own brand of insanity, the film then restrains itself a bit, just to remain consistent with the insanity of the first feature, which wasn't much insanity. What starts feeling like a nonsense adventure, becomes an adventure with some logic, which leaves the wonder out of the wonderful, this is supposed to a be a weird world, let it stay weird. There's too many rules, it's not a world of madness, this is a world of simply strange things, which just isn't as fun.

I suppose I should also point out that Alice, is the one who causes the problem here, which is stupid on the film's part, but I'd let it slide if the movie were better. So it's a problem, one that adds to the issues of the film, but it's one that could've been better had the film been given another rewrite.

Skip this one, Through the Looking Glass is a better film than its predecessor, but that doesn't mean much. In a better world, this team would've made the original film, possibly making that a good feature, but in our cruel world, they were left to shine a turd.