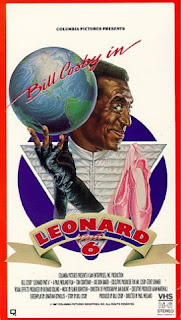 Here's a movie "sequel" starring the Puddin' Pop Rapist himself, spoiler alert, this is not the worst thing he's done, but it's still bad.

How bad is Leonard Part 6? Even Bill Cosby went on to trash the movie BEFORE IT WAS EVEN OUT, Bill publicly advised people not to watch it, and sure his opinion may not be the best, just ask dozens of women (okay, I'll drop the rape references, but come on, how can you not think of them when the man is confirmed to be a monster?).

So knowing all this, is the movie really that bad? Kinda. I'll admit, the idea of this being a sequel to a franchise that doesn't exist is a funny joke, but the movie never does anything with that, I mean wouldn't it be funnier if the characters all acted like those movies existed? Or what if this mocked sequel tropes, like maybe Leonard could've gone to space, or maybe acknowledged that his wife used to look like a different actress, something. Nope, the movie instead just establishes the other movies were adventures that were "confiscated" then begins to just do a story that could've existed regardless of the sequel gag. Sure, making the sequel idea a running joke could've sucked as well, but as is the movie just leaves it as a weird gag.

I do admire the amount of jokes the filmmakers are clearly trying to throw at us, I just wish more could've landed. There's an odd gag early on wherein a fish attacks a man, while growling like a dog, I suppose it's meant to be funny because the fish killing a man is over the top, but the fish growling was too much, it made the whole thing fall flat. Once I saw that joke, I just knew what would be the movie's biggest flaw, every time a decent joke tries to escape, the movie has to ruin that. Another scene features a spy, being murdered by frogs, the frogs in unison, jump under his car, launching him to his death, strange but it could be funny, had the scene not tried to be "funnier" by introducing the gag by having the spy mistake the frogs croaking, for the villains talking. So much here is just odd, with no joke landing because the movie just keeps doing too much with each joke that it all gets more awkward than comedic.

So in summation, this movie sucks, there was potential funny stuff here, but it all fails. So much like Bill Cosby, I recommend you stay away from this, which says a lot about how much this sucks, because a rapist usually will lie to get you involved in something horrible... Seriously fuck this movie and the monster in it, we all deserve better, especially the women hurt.