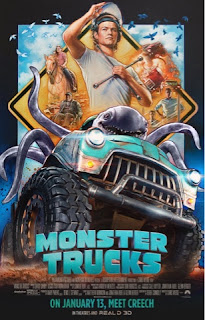 This is a movie someone decided to make.

If you weren't aware of this, Monster Trucks is a movie that has been pushed around for two years, it finally being released after much issues can only mean one thing, someone wanted this movie to see the light of day, someone thought this was a good idea. I've been baffled by this movie's existence since that first trailer, "this can't possibly be any good" I would think. My assumptions, as it turned out, was correct.

If you weren't aware of this movie, the plot is a basic one we've seen before, ever seen E.T. The Extraterrestrial? How to Train Your Dragon? How about Lilo and Stitch? This is one of those movies, so you pretty much know what to expect. We get a boy (obviously played by a man) who encounters a creature who consumes oil and can power a truck (just go with it) and they must avoid an evil corporation, it's just that. This isn't a bad telling of the story, nor is it a good one, its average, which means this is among the better movies in my January of Suck run, if not the best. It's not trying to be anything more, it is just a movie that exists.

At best, Monster Trucks appears to be a pitch for a cool theme park attraction we'll never get, at worst, it's just not impressive. I wasn't convinced we needed more, I wasn't convinced this was necessary to make, I wasn't convinced that this was some monumental mistake, I just found myself asking why the team didn't cut their losses to just turn the chase scenes to a ride (seriously, seeing Creech in the Truck climbing walls and driving fast looked fun). I just can't get worked up about this film in any way after watching it, I just saw it, said "well that was something" left the empty room, and said nothing but farewell to the worker who acknowledged me at the door. This was just nothing to me.

If you have kids, I can't imagine this being a bad film to show them, outside of the laughter of seeing an obviously grown man acting as a high schooler surrounded by actual high schoolers, there were no strong reactions I got out of this. Granted, if you must show your kids this kind of movie I would say you're better off showing them the other films I mentioned above, why show them the average version, when the excellent ones are available? In any case, yeah Monster Trucks is a decent film, I don't recommend watching it, but I won't shame you if you do.

P.S. That poster is probably the best thing about this movie.