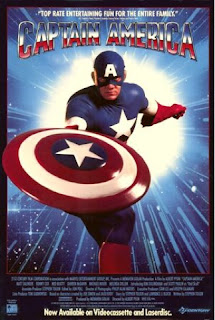 As far as bad adaptations go, this is not awful. It's not good, let's be clear there, but I'd be lying if I said there wasn't any charm, the actors are clearly having fun, the costumes are fairly decent and the action... is there.

The big drawback here is honestly the budget, which makes the movie look older than it is, while also not allowing for much excitement, but considering how awful I've heard this was, yeah there are decent things here, even the story isn't awful. It's campy sure, but it feels like a Captain America story, not a great one, but one a kid would read and enjoy at a young age.

There's some oddities here (I won't spoil the scene where Steve becomes Captain America, something so over the top occurs I bursted out laughing), especially regarding the villain (Red Skull is Italian for some reason). I'm not sure the movie is hurt by any of the weird choices, but they definitely seem to hurt the film for many. For me, what hurt the film was the lack of excitement, so much just feels too dull for this character, this honestly feels to me, what many assume the recent films would be like, prior to their release of course.

Captain America, not an awful movie, but nothing great either, recommended only to diehard fans of the hero, or very young kids.