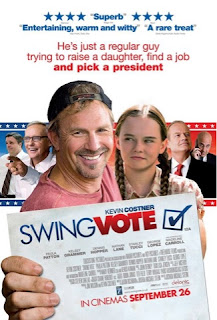 One man decides the entire election in this fictional film, imagine if that were our last election? We'd know exactly who fucked us over with the orange menace.

I'll avoid talking much about our current political climate, considering this film was made years ago, but make no mistake, I despise our new "President".

Anyway, Swing Vote is a dramedy about politics, I think, honestly that only feels like a part of what this film does. For the most part it's a movie about a shitty father trying to raise a daughter who's smart enough to know she is in a bad situation, the political stuff just seemed to be an excuse to make this film have greater weight, but it never amounts to much. If this movie were about the lead winning the lottery, or saving a celebrity's life, or insert thing that makes someone newsworthy, I'd imagine it wouldn't be much different is my point. I'm not against the film focusing on the father/daughter relationship mind you, I just wish it were better told, outside of a reveal in the film regarding the mother, I just never see much reason why we should care about the father keeping her, he is pretty bad, which is a significant issue, we should believe he is a good man going through rough times.

On the political subplot, the issue is that there's nothing insightful there. We get jokes about the men, radically changing their stances to reflect the lead, but aside from "haha get it? In real life these parties believe the opposite things" we don't get any biting satire. I mean, okay the film barely touches on this situation making America a joke to other nations (yeah, this is pretty relevant now with the Douche in charge), but the film rarely acknowledges this. It is smart enough to understand some basic things about campaigns and politics, it just doesn't take advantage of the topic, likely due to the focus of the lead and his daughter, which is a shame, because you can see hints of a smarter satire.

This is a short one folks, it's not a good movie by any means, but it's not awful to sit through. I wish the film had been a better satire, or at least a better story about parenting, but in trying to be both it misses the mark. Skip Swing Vote, it's not awful, but you won't remember much if you stick around.