GOD'S NOT DEAD-JANUARY OF SUCK 2 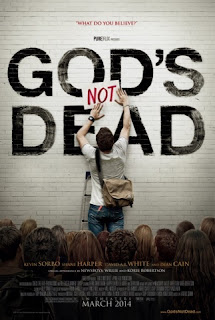 So far this year's January of Suck has been bad, but this movie is quite honestly the worst so far.


God's Not Dead, isn't a movie, it's a message for Christians to congratulate themselves and shame those who reject their beliefs. Sure, the movie has this facade of accepting others, but considering the movie goes out of it's way to villainize atheists and those of other faiths, it is just that, a facade. Don't believe in a god? You die, believe in a different faith? You are cruel, no care for the passion in religion makes you selfish, and so on. There is nothing redeemable in a person who does not accept God, a case this movie makes, despite arguing that those who oppose God aren't allowing the freedom to chose. Of course if the movie were smarter, it might offend those who desire to shame others, pathetic.

That's the funniest thing about this film, it's argument for choice is flimsy, no one really makes an argument saying it's okay to believe in other things, they all just either argue for God, or are caricatures calling for hate. In fact, in one of the many ways this film could've been cut short, Kevin Sorbo's character even states that the lead could go back home to pray,  the "God's dead" statement is for class only. Admittedly, the Professor is being messed up, but he's not exactly forcing atheism outside of class, he wants it out of class to avoid distractions, again messed up, but not exactly deserving any real argument to fill a movie's run time.

The odd thing here is this, the film knows it has so little material, which makes it resort to a bunch of subplots that connect in the most bare minimum way possible. The main plot is of course the stupid class argument of God's life, but the movie also features an atheist blogger who insults one of the Duck Dynasty guys (mad props from me, they can rot), she gets cancer because atheist. There's also a priest subplot that seems to exist just for the ending, we get an Asian character who believes in God because of the class argument, Dean Cain appears as a selfish asshole because... It furthers the message? And Sorbo's got a girlfriend who believes in God, she's abused so that... The message is furthered? Anyhow there's one other subplot that we'll get to in a bit. As is, all this padding makes for a movie that feels way too long, despite the movie obviously trying to make it feel like the exact opposite in putting all these short stories together.

On a more nit-picky note, the main character, Josh Wheaton, is dumped by his girlfriend early on, due to his obsession with proving God is alive to a class that won't matter after college is over, I side with her here, why does it matter? The film makes it look like she's selfish, but considering Wheaton's obsession, I honestly feel like he's got an ego problem. Anyway that's not the nit-pick, my nit-pick is regarding a young Muslim girl in Wheaton's college who rejects her father's faith for Christ, the film almost makes you think she's here to become Wheaton's new girlfriend, but it never happens. Not that a relationship between the two would've fixed this movie, but it does make me wonder why the film hints it, but does nothing with it, could the filmmakers perhaps just be accepting enough of POC to present them, but not enough to allow for mixed couples? Even if I'm thinking too much into this, her addition to the film does so little, beyond making her father look cruel for worshipping a different faith, of course (ironic).

Do not watch this film, it's an insult masquerading as a form of empowerment, fuck God's Not Dead.