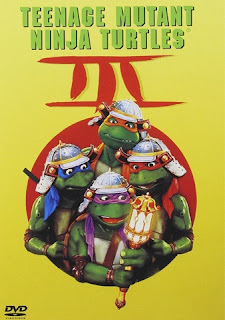 Behold, the worst Ninja Turtles film, I just can't remember it too well to prove it.

I saw this, knocked out, which is not something I've done before for this January of suck, and now I kinda regret doing so cause I'm struggling to remember what happened. I know this features time traveling, something about weight being a factor in time traveling, feudal Japan, nad a whole bunch of junk I didn't care for, but I'm struggling on the specifics. This is a boring film, just tiresome and a mess.

The effects are noticeably worse than the prior films, I'm assuming the Jim Henson company jumped ship. The suits on the turtles just look awful, I mean they don't look as awful as the Bay designs, but they certainly aren't good.

I know, short review for this, but I'm not gonna bother watching this again, I hated the film as I sat through it, forgetting it easily just feels like a blessing.