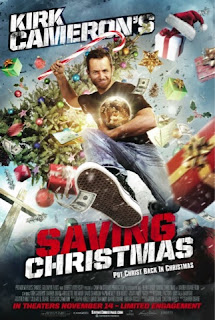 Kirk Cameron's Saving Christmas is propaganda, unintentionally hilarious propaganda, but also potentially harmful propaganda for the dumb. How can a Christmas feature be harmful? Well, when your film is actively saying greed is good, shunning questions about the state of celebrations and can't realize that stating crosses are like Christmas trees (those burning crosses from the Klan are Christmas trees guys!) is probably not a good idea, yes this is harmful.

Also, stereotypes are cool guys. There's a character in this film, who is odd, he feels like he's meant to be Kirk's black/possibly gay friend, no seriously, and the movie spares no scene with him to acknowledge he is black/possibly gay, which is odd considering he states "straight power" at some point. So add stereotyping to what's wrong here, Christianity, the compassionate religion at work?

Okay, so if you've never heard of this movie before you might be wondering what this movie is about, what is Kirk saving exactly about Christmas? Well, his "brother-in-law" feels bad about how Christmas is less about Christ and more about material gifts, which is a fair assessment, regardless of worshipping this religion, so here comes Kirk to say "lol you are wrong!" I wish I were making this up, outside the lol line of course, that I did make up. So, how does Kirk prove to Christian (yes that is the name of the fictional brother-in-law) that he is wrong? By citing three random religious moments (including, I shit you not, a dubstep St.Nicholas fight) that in no way connect to the questions Christian raises, but fuck it, he's convinced anyway.

Kirk, buddy, let me tell you something, it's okay to question what we do, it's okay to acknowledge some things are wrong, I don't care if St.Nicholas beat up some guys, so Santa Claus is not wrong, the point is that people are worshipping an idea that lacks the context of its origin, sure I don't personally care, but I understand why someone might be concerned that their religion is losing its point. No one buying a tablet for their kids thinks of Jesus, they do it because of tradition, religion is often an after thought to Christmas realistically. It's okay to say our modern Christmas is fine, that I can agree with Kirk, but it's also okay to acknowledge that it has deviated from the religious aspects, Kirk's answers are stupid and do not silence the questions, they just make me ask what the fuck is his point in all this?

Once that's all over Kirk and Christian rejoin their Christmas party, and do the most "white people-ish" hip-hop dance party EVER! It's hilarious and goes on forever, so somehow it makes this movie watchable.

That's what this movie is, watchable, it's awful, but I laughed at the bad moments all throughout, I feel so much is hurtful, which it is, but this movie is just a dumb enough mess to laugh at. Don't watch this movie to reaffirm your faith, watch it to laugh at how a moron tries to say bullshit is okay.