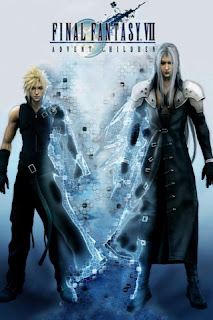 Two days later and we now have a new worst film I've seen in January of Suck, what the hell?!

I'm not a Final Fantasy fan, I tried, but I just could not get into it. Granted I didn't play the first six games, so maybe I'd like those, but I sure as shit don't like this movie. Maybe this would all make more sense if I fully completed Final Fantasy VII, but I imagine I still would hate this.

I'm not even gonna try to describe the plot, largely because I sure as hell couldn't get any understanding of it. Cloud is the hero, there's some white hair guys there, they're the bad guys, a lot of action happens, I'm guessing there's some religious allegory in there, and friendship saves the day. Trust me, you won't get it, I bet even the fans don't get it, they're just admiring the visuals, or reading the explanations elsewhere, because the movie either says too much, or just devolves to fights, whenever someone tries to make sense of this.

But hey the animation is good right? NO! Sorry Square Enix fans, but the animation here is not good, the humans move too stiff, in fact they never feel alive, they display so little emotion, I often felt like they were just puppets and not characters. The only thing that ever looks realistic is the fabric; the weapons, locations, all of it looked like obvious CG, none of it is truly impressive. There's also a weird look to every scene, like there's a dreary filter, it just looked ugly, I'm not sure how to properly explain, but it felt like the lighting was incomplete.

I was unimpressed by the animation, the fights were tiring, the plot was all over the place, and I just wanted to sleep through this mess. Skip Final Fantasy VII:Advent Children, stick the game if you're a fan.