ESCAPE FROM TOMORROW-JANUARY OF SUCK 2 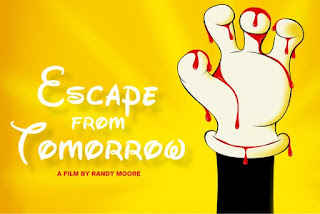 Look!It's the movie Disney, doesn't give a shit about if you watch it!

I'm not against people doing takedowns of things I like, I really don't care, I am, however, against poorly made, awful films. If this were a smarter takedown, sure I'd be fine with it, why wouldn't I be? I am not an overly defensive fanboy of Disney, I like their work, sure, but I'm not gonna act like everything they do is perfect. This is a mess, acting like something much smarter, spoiler, it is stupid.

This movie thinks that subliminal sex messages from the mouse house is shocking, it acts like sex imagery with Disney is unique, perhaps damning of the corporation, which, to be fair,  could be shocking, but this movie presents in a manner too blunt for cutting satire. It's not insightful, unless shouting "SEMEN!" In front of a Disney ride is your idea of biting satire. Beyond that, I'm not sure if this movie has much in the way of "satire" Disney is portrayed as all controlling, but taking everything as it plays out demonstrates otherwise, a separate entity messes with the lead, while Disneyland just happens to be where he's at. There's questions about what Disney serves guests, but it's nothing earth shattering, in fact meat being labeled differently is a sin among many companies, how is this a Disney takedown? Sure targeting companies for offenses, regardless of being common is good, but it's not biting satire if you just say it. Of course, not saying it is left for the pretentious penis metaphors.

It's the pretentiousness of it all that really kills this, it'd be one thing if this just said "Disney likes sex!" but no, this goes out of it's way to taunt us, tell us it is smart, when it is not. Showing me Disney rides, with some "twisted" imagery isn't intelligent, it's not making me rethink how I feel about Disney, I just feel jealous and annoyed I'm not there instead.

Of course, what perhaps was the greatest thing about this movie, is realizing Disney, in all their power, did not give the slightest fuck. They chose not to sue for the use of their imagery, they chose not to pull this for mocking their theme park on site, Disney looked at this and did not care at all. This blow to the film was stronger than any lawsuit, if this were hidden, sure, it'd be known as the film "Disney doesn't want you see",  perhaps disappointing generations to come. As is, Escape From Tomorrow is the movie Disney doesn't care if you see, because it is weak.