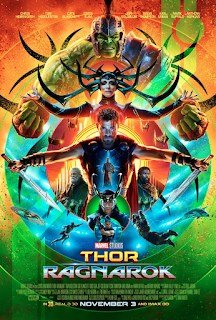 It's the best of the three movies, we all figured that, let's move along.


I don't shy away from admitting that I find the Thor films to be the weakest for Marvel, yes they're still fun overall, but they've never impressed me all that much. Thor:Ragnarok isn't just a fun movie, it's easily among the top Marvel movies for me, MCU or otherwise. The key to Thor you see, at least after watching this, is that aside from it having to be weird, colorful, visually impressive and out there, is that it needs to understand that it is all those things. What I mean, is that while a serious Thor film can exist, a lack of accepting any Thor film is going to be weird no matter how dramatic you make things will always hurt the experience.

The plot this time picks up a couple of years since the last Avengers film, with Thor having no luck finding the Infinity Stones. After an encounter with Surtur, a demon who is destined to bring Ragnarok to Asgard, Thor begins to realize there is something off going on at home. As we found out in the last film, Loki is revealed to be in charge of Asgard, which leads to him and Thor looking for Odin on Earth. Upon finding Odin, the two realize that a greater threat looms over Asgard, Hela, the banished sister of the two wants her place in the throne at any cost. Thor eventually finds himself lost on a strange world, ruled by a hedonistic leader who loves creating gladiatorial battles. Thor must find his way out with the help of an old friend and a familiar bounty hunter, before Asgard is destroyed by it's malevolent new ruler.

As you've probably already heard, yes, this is the funniest Marvel movie to date, which comes at no surprise with director Taika Waititi at the helm. While I'm sure this might not please all fans, I loved it, Norse mythology is weird, throwing it in modern day while adding a bunch of cosmic business is bound to create something even stranger and sillier, so I can't blame the choice to make this comedic. The other reason why I think the comedy here works lies in the theme. Without giving much away, Ragnarok refers to the end of Asgard, which is certainly a dark theme, but the message is about how we can move forward from the end, humor is one way to accept pain and move on from it. Looking at it that way, the humor here becomes more vital, there are many ways to move on from loss, yes, but joy is often the main factor. The jokes are there to ground all the nonsense on display, sure, but it helps reinforce that everything can be okay, even when the world is ending.

Before you start wondering, the film's biggest strength lies in its cast. Chris Hemsworth was always a good choice for Thor, but here it feels like he's reinvented the character into something better, Thor is the most fun he's ever been. Tom Hiddleston returns as Loki, which is probably the most fun he's been since the first Avengers film. Speaking of The Avengers, the Hulk is the best he's ever been in any movie here, for starters he finally talks, which is awesome and Mark Ruffalo ends up being perfect as the outsider confused by everything going on; the two year wait for his return created a great pay off. As for the dreaded "villain problem", Hela is awesome, Cate Blanchett plays the role more like a Disney villain than comic book villain, which makes her a stand out, sure I preferred the main villains of the previous two Marvel films, but she's great in every scene she's in. Also great, Jeff Goldblum as the Grandmaster, he's weird, he's funky and he's a blast on screen, think the Collector, but with the eccentric nature dialed to eleven. Perhaps the coolest performance in the film, Tessa Thompson as Valkyrie, I won't go into the details here, as that would be spoilers, but suffice to say, she's the Han Solo of the team, with perhaps the most interesting arc in the film. The film also contains a great supporting cast, including the director as a soft spoken fighter named Korg, Odin, and a cameo you'd expect if you follow these movies.

Before I wrap things up, I just want to make it clear that the film succeeds on many fronts. Visually, this may just be the most amazing Marvel film to look at, the colors all pop, while the creatures, locations and overall design are all just breathtaking, this needs to be seen on a big screen. This film also has a great score that is mixed well into the film, perhaps better than any other MCU film. It's an absolute blast, even if it could stand to lose a few minutes.

Thor:Ragnarok is the best Thor film, that we pretty much knew the second the trailer dropped, but it's much more than just that. It's an amazing film, one of the best in the MCU, coming out of it I knew it was in the top ten, thinking it over, it may be in the top five. It's the funniest movie in the MCU, the funniest movie of the year, and a delight in so many ways, I can't recommend it enough, go watch it.