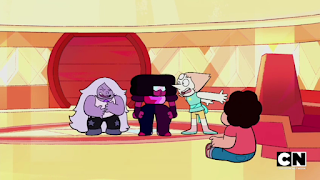 This new Star Trek show is weird.
Following the last episode, I honestly didn't know what to expect, sure I figured the show would have the Gems go after Greg, but I also didn't expect this. This episode makes it clear that we won't be seeing much of earth throughout the story, which is a pretty interesting way to go about this arc. Steven and the Crystal Gems are out of their comfort zone here, they're no longer surrounded by beings weaker than them, so I wonder what kind of struggles we'll get to see.

As Steven and Garnet return home, Steven is completely freaked out, being incredibly driven to find his father. The news about what just happened is explained to Pearl and Amethyst, both agreeing to go to space, they decide to use the ship the Rubies had (which brings up a great joke about what's going on with them) Peridot and Lapis are left behind to guard Earth as the Gems begin their space odyssey. After Pearl reveals the journey would take 70 years, Steven hilariously acknowledges that there is no way his father would live that long. Desperate, Steven tries to speed up the journey, resulting in the Gems having their forms changed, as Steven tries to correct things, their bodies continuously change, until they lose their forms, resulting in the ship going so fast that Steven can no longer control it. All of this leads to an emotional moment, wherein Steven blames his brash behavior for everything. Eventually the ship is slowed down, with the Gems retaining their forms, the destination within view, they all share a nice moment to calm Steven.

This is a very emotional episode, not just because of the sadness in seeing Steven blame himself, but also because it's very funny all throughout. Seeing Steven acting more desperate than ever before is certainly something to behold, especially once he acknowledges his mistakes in trying to figure things out. Despite the tears though, the episode is still very hilarious with well-timed comedy that comes naturally from the situation, making for another stand out episode. I honestly can't wait to see more of this arc.