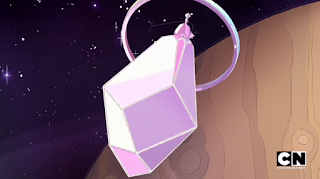 Mexican Steven in space I guess.

The episode is too short, but I also still really enjoyed it, don't get mad at me for repeating that issue here. I've often made that argument for this show, a lot of episodes could benefit from this being longer for certain episodes, in fact two episodes did benefit. Admittedly, where I feel this episode might've benefitted most if longer is in the comedy of seeing the Gems act as they normally should. Don't get me wrong, a longer runtime could have easily made everything more tense as well, but seeing the Gems poorly act out their roles was an interesting (and yes, funny) set up, it's a shame we don't get more of it here.

Picking up where we last left off, Steven and the Gems arrive at the human zoo, once owned by Pink Diamond. Amethyst guards await the four (looking a bit more like Jasper) to fool them, Garnet decides to separate, all the Gems must act as they are meant to in Homeworld, while Steven plays a captive human for the zoo. They're informed that Blue Diamond is away, allowing for a safe heist by the Gems, so long as they pretend to be taking a tour. Holly Blue Agate, the gem in charge of the zoo while Blue Diamond is away, is very proud to show Sapphire the facility, discussing its layout as the improvised plan continues. Eventually Blue Diamond begins to return, resulting in Steven being thrown into the zoo, with the episode ending with Greg having been found.

It's honestly a solid episode, sure I think the episode could be improved, but it's not bad. It's certainly a funny episode despite having a lot of tension on the "will they/will they not be found out" set up. It's always interesting to further explore other Gems, even Holly, who is as of this moment one of the least interesting Gem designs, gets to have some good moments explaining the facility. My guess is that this episode is set up for what's coming soon in this arc, setting up potential plot points, if it is it was pretty well done.

A longer episode would definitely have been better, but for what it is this is another good episode for the story arc.