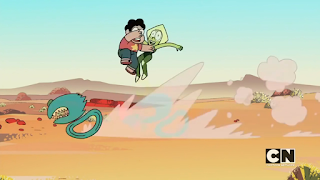 "Ouch"-Wile E. Coyote
Up to this point I've been mostly mixed on this show, I do like it overall, but I also don't love aspects of it. Coming into this season, I've decided to try being more open to it, remove my expectations for the season and just run with whatever comes, regardless if it connects to an overarching storyline. I don't think that will make me like the show more, but let's see.

So if you didn't pick it up based on the still up there, as well as the opening quote, this episode is a homage to classic shorts, specifically the Road Runner ones. Peridot takes on the Coyote role, while Steven stands in for the audience, practically trying to point out how wrong Peridot's plans are. The corrupted Gem we see this time is a cute, obvious stand in for the Road Runner. Suffice to say, if you know those shorts, you know the jokes this one will bring, my favorite though, is Steven's acknowledgement that Peridot seems to be taking more than enough damage to have lost her form at least once. As the episode ends, Peridot proves to be good for the job, while Garnet, Pearl and Amethyst reveal they've been watching the whole thing, presumably laughing at their mishaps.

This is a cute episode, there's really not much to say about it. Once again the show proves that it's strength is in making great characters, while the more exaggerated humor is a welcomed touch. I do like seeing the show make use of the new team members on the field, so it would be great if the season does just that, rather than just rely on the starting main cast, Peridot and Lapis are too good to be left behind more often than not.

Season 4 of Steven Universe is off to a good start, as always I hope that remains consistent. As mentioned before though, my goal this season is to try and be more open to the way the show progresses, hopefully I'm not let down.