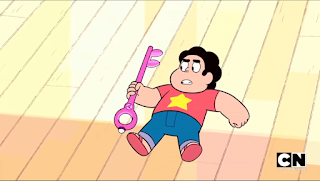 And Steven would go on to someday meet this, "Nora".

How long has it been since we last got a Lion focused episode? Feels like forever, which in many ways is the biggest issue here. Let me be clear, this is by all means a pretty good episode, it's got emotion, as well as a pretty good revelation, the problem is that this is coming two or three episodes after it should have at the least. In fact, given the new tape reveal, as emotional as the last Lion episode was, I honestly feel this should've been part of that episode. I've admitted to enjoying this season a lot more than the previous three, but as we draw near the end of it I'm reminded of why I've had issues with the show before.

The episode begins with Steven playing the tape of his mother on loop, confused about his purpose, the reason Rose decided to give birth to him. Lion, possibly just annoyed of hearing Steven mope, does what he always does in these episodes, provide Steven with hints. We see Steven go through various locations connected to his mother with a strange key, it's a cute sequence for the fans which culminates with the latest secret being... junk found near Lion's original location. In the junk, Steven finds an old tape labeled Nora, which leads to a pretty funny (not sure if intentional though) sequence of Steven questioning if he's even the only child Rose left behind (imagine if this was Guardians of the Galaxy 2 to make things darker). Steven quickly takes the tape to his father, as they play it, Steven realizes it's exactly the same as the first tape, only with Rose addressing someone named Nora. As Steven cries, questioning his purpose and what happened to his apparent sister, Greg explains that Nora IS Steven, assuming Steven was born a girl anyways, while also explaining that he has no real purpose, Rose just wanted him to live as a human, neatly wrapping his questions for this episode.

Again, I think this is a good episode, but my problem remains, this episode feels like it should've followed up Steven conjuring Rose in his room, having a three episode break in between makes the intro a bit weird. Suddenly Steven is obsessed with his mother's choices, which is understandable, but why did he avoid obsessing over it after literally (not really) meeting his mother? Even with that knowledge, part of me feels like if the "Nora" recording was a part of the last Lion episode, the experience would've been stronger, as Steven's reminder of his mother could've easily been ruined by the reveal of "Nora" and the upset reaction could've lead to some interesting stories then, here, it's cute, but it feels late. This show really needs to learn the importance of structure, that it feels odd that we see a story like this feel out of place is not good.

By all means a good episode, but a victim of Steven Universe's odd sense of structure. Please season 4, fix yourself for the finale.