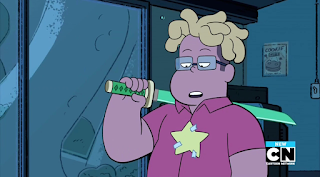 While while you were out partying, I was busy studying the blade... and Gems.
Going into this I wasn't sure what to expect, personally I like Ronaldo, he's a funny dork, but I also didn't think a goofy episode like this would work right now, the answer is kinda. This is very much a funny episode, Ronaldo being the weird anime fanboy provides a lot of great jokes, especially as Steven desperately tries being kind to him. On the other hand though it is very inconsequential, there's no weight behind this episode and that's fine, but it does leave it feeling very shallow given what the season has provided. I liked it, but I wouldn't care if I didn't see it again, which is fine, but I imagine that's not the response any creator wants to hear about their work, so let's dig into the plot so I can explain myself.

As things are fully calm now, Steven goes around town for some fun, along the way though he finds Ronaldo spreading the word about rock people. Steven, being a Gem himself, realizes that Ronaldo is referring to the Crystal Gems, though Ronaldo claims he does not view them as such, Steven quickly points out how much it all comes off as slurs to him (that's hilarious). Ronaldo, ever the weird goofball, decides he wants to be a Crystal Gem, the other Gems deny the choice, but Steven accepts it so naturally Garnet allows it. With Ronaldo being his know-it-all self, things quickly go bad, he complains about not going on missions, he goes for an edgy name, Bloodstone (Ha!), Bloodstone even questions Steven as a Crystal Gem, leading to a breaking point after Steven, typically, leaves his Crystal Gem life when Ronaldo kicks him from the team. Steven makes a passionate plea for Ronaldo to leave because he has been too much of a jerk since he joined, resulting in Ronaldo disagreeing but falling to sleep as he had been awake the whole week or so. The episode ends with Ronaldo accepting his leave, deciding instead to work with the team, rather than for.

This episode is funny, that much is true, but it also feels so late, realistically this episode should've  happened a few seasons back, after that mockumentary episode. The placement here just feels off, sure we need a good silly episode every now and then for a break, but this just feels like it's resolving a topic that we've gone past a long time ago, it just feels like a late punchline. Easily the weakest episode this season, but by no means bad, I hope they don't make this mistake again soon.