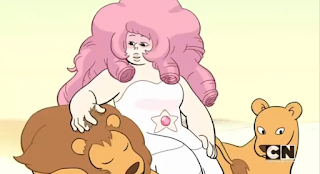 We need more history with the Gems episodes.
Well, it's an okay episode that's for sure, I personally just don't like Jamie all that much. I'm not sure if it's the personality, or the voice, but I find myself glad that Jamie rarely appears on the show, he's not the worst character that the show has offered, but he's up there. That this episode manages to be a decent one is a testament to how good the Crystal Gems are, as well as how fun it is to see them in the past. Still, it's a Jamie episode, so it's one I barely remember.

The episode begins with a library dedicated to Buddy, an explorer whose tale was hinted at before (I think, I hardly remember the stage show episode). Steven and Connie began reading a journal written by Buddy, who they imagine looked like Jamie. The book tells the tales of Buddy, trying to find new, undiscovered lands, along the way he encounters past versions of the Crystal Gems, all of whom are given neat past designs. There's a few fun things here and there as the adventure unfolds, but it all serves to give us small looks at the past, including a small confirmation of Lion's connection with Rose having been around for centuries.

This is a harmless episode, there's a few nice laughs, while a look at the past provides some charm. That being said, Jamie is just not a fun character to follow, even when he's just taking the role of another character he comes off as very uninteresting. The episode's main saving grace is the past Gems, it adds cute designs for the trio, while also having a bit of humor in seeing how they behave.

Bottom line, this is a weak episode, it's not bad, but I won't remember it soon.