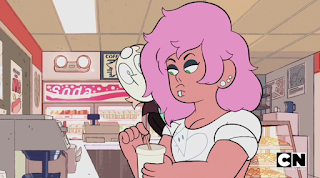 Pearl is getting some tonight!

Well this was a cute episode, sure it's nothing great, but I like seeing the Gems trying to do some normal things for a change. It feels like it's been a while since we've had a Pearl heavy episode, so it's nice that this episode shines a light on how she used to be different before Steven. We don't actually see the past in this episode, but Pearl's stories, as well as some appearances in the past episodes would suggest that Pearl used to be more wild.

The episode begins with Amethyst ready for a concert with Greg, though Greg reveals he cannot go, resulting in Steven and Pearl deciding to go with Amethyst. Pearl tries acting cool, but her act is ruined when a mysterious woman who looks like Rose appears. Amethyst forces Pearl to talk to the mystery woman, but she fails to do so, at first, as it turns out the three keep seeing the mystery woman. Eventually, after a cop chase and some confusion, the three arrive at the concert and Pearl finally talks to the mystery woman, who then gives Pearl her number.

This is a cute episode, Pearl being shy at trying to hit on the woman is relatable. I like that the episode focuses on Pearl's feelings, without dwelling on them, it allows to see her perspective, without questioning her feelings for someone being entirely based on their appearance. I'm not sure if this mystery woman ever appears again, but I wouldn't mind seeing the show use her for future episodes.

It's a cute episode, nothing great, but I liked seeing the show flesh out one of it's characters even more. Hopefully Pearl finds love again.