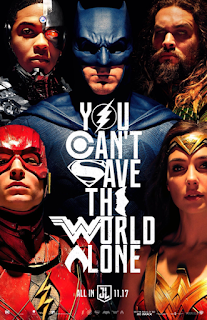 "You can't save the world alone"... Let's assemble some heroes who have done just that!


I am not a fan of the DCEU, in case I never made that clear I'm making it clear now, it's a mess, the heroes are a bit too grim and there's no clear direction, BUT! Wonder Woman was good. Jumping back into a Zack Snyder production I was worried, his movies have never truly impressed me beyond a few well done sequences, hearing Joss Whedon take over directing duties late into production (I truly feel sorry for Snyder and wish him the best as he deals with his loss) did not give me much hope. I'm not a big fan of Whedon, so seeing his input wasn't changing my mind and even if I loved everything he did, this change was too late to fully succeed. That all being said, I am still not in full support of the DCEU, but Justice League gives me some hope that it can be corrected, not as much as the previous film, but I am curious.

Let's get the worst part of this film out of the way, the story. Taking place some time after Batman v. Superman, the world has grown darker in Superman's absence. As Batman continues fighting, he realizes there are some strange creatures attacking, assuming this to be the major threat foretold by Lex Luthor, Batman wants to assemble a team, comprising of Wonder Woman, Aquaman, the Flash, Cyborg and himself of course. Meanwhile, the mysterious Steppenwolf, who may or may not be working for a greater evil (there's only one mention of this in the movie as is) has come to Earth to gather the Motherboxes, a trio of magic boxes with the power to do evil things, like terraform the Earth. The new team of heroes must assemble... er, go all in to save Earth, but as things get crazier, Batman decides they may need an old friend who the ads have kept secretive pretty poorly. Obviously the Earth is saved, the team become besties and we get hints for more adventures.

The movie is clearly the product of conflicting visions, sometimes the story is more upbeat and carefree, while at other times the movie acts as overly serious as the previous Snyder films. For me, the conflicting tone is most noticeable during the first hour, where we see the various heroes gathering, or avoiding to for the League, we get moments that try to overcompensate for the silly material (Aquaman's intro made me laugh at how hard he tried to hide the obvious) and then we get bits of Barry joking around so much that it's clear he's more Whedon than Snyder. Add to all this a pretty shallow plot that feels like a retread of Marvel's first team up film, as well as a boring villain that feels like a cheap version of Ronan the Accuser (who I actually liked!) and the film starts to feel like a drag. Somehow though, a bad plot does not kill this movie, it does keep me from really liking it, but I didn't hate the movie despite having one of the worst superhero movie stories in the last five years.

The film's main strength is the cast, not the decent score, or the enjoyable but shallow action, the cast is actually pretty fun here. Gal Gadot is great as expected and I think the higher ups really need to consider what a spectacular actress she is for the universe. Ben Affleck is once again good in the role, I just wish he'd get a movie worthy of his talent, granted his future with this franchise is up in the air at this point. Ezra Miller is probably gonna be divisive as the Flash, but for what it's worth I like what he does in the role, it may not be the perfect version, but there's a charm to his passion. Aquaman is definitely more inconsistent totally throughout the film, but I do admit to liking him when he's in "bro mode" which I assume was Whedon's addition. Sadly though, our weak link comes in the form of Ray Fisher as Cyborg, he's not awful, but there's nothing there personality wise and he just feels like an animatronic from a ride. My biggest surprise though, is how good Henry Cavil, is here, he's not perfect, but he finally seems to get it, in the few scenes he's in I honestly felt proud to say he was Superman, which is weird considering the flashbacks even make him more likable then he ever was in the past. As for the supporting cast, everyone is serviceable, there are no real standouts which is fine, but doesn't really make me expect much for the future appearances of those characters.

Much has already been said about the effects of the film looking very fake, I can't say I disagree. Upfront, the reports of Cavill's mustache were not exaggerated, you can tell every time they CG'ed the mustache out and I laughed every single time it came on. Also bad, Cyborg, with the exception of his head, I never felt like he was there, which makes things weirder when his head just looks like it's just floating when he walks. The worst offender in the effects though is the film's villain, Steppenwolf,  could they really not find an actor who could perform in make up? Because he just looks like a PS2 cutscene every time he's on screen, which seems to be a common trend for the DCEU.

Looking at this, I may be going easy on this one, maybe it's just how beaten I am from having to see characters I love be mistreated, so a semblance of respect makes this more forgiving as an experience, or maybe it really is that much better than it's predecessors (minus Wonder Woman). I can say I definitely smiled a few times and I didn't regret sitting through this one, I have some hope for the future of this franchise, so long as what works is kept. I may be going soft on Justice League, but after some positives in a franchise that has been mostly negative, I am glad we are seeing some steps forward, even if it's not enough.

In the middle of the credits we see Superman and the Flash getting ready for a race. It's a cute homage and the chemistry there is charming.

After the credits we see Lex Luthor (Eisenberg's voice feels off for the role, but he looks more like Lex so it's cool I guess) meet with Deathstroke, the Legion of Doom is being formed which is fun, but not as fun as it should be.

I hope we go up from this.