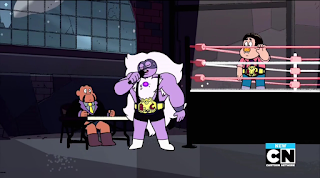 I honestly didn't think this would get a follow-up.
Back in the wrestling ring, Amethyst and Steven are winning yet another match as Purple Puma and Tiger Millionaire. By the end of the match, Amethyst, who was visibly bored during the match, reveals she is retiring from wrestling. Shocked by the news, Steven soon asks her why she's giving up, the reasoning being that Amethyst no longer feels like it's a needed outlet to vent her stress, Steven is disappointed though as he loved doing it as a thing they shared. Shortly after, Steven returns to the ring alone, calling himself Tiger Philanthropist, which garners a good reaction from the audience, except Lars. At the donut shop, Steven questions Lars over his opinion, which doesn't exactly make Steven feel positive. During the next match, Steven announces his leave from wrestling, Amethyst comes back, deciding that she'll join his finale to make the audience go wild, as they lose they both accept it's time to move on, Lars however doesn't want to.

I'm not entirely sure what to make of this episode, it feels like it's trying to be a commentary on the show, but there also seems to be no real comment being made. Amethyst leaving the world of wrestling just feels like a bit of character that's a bit overdue, but Lars' reaction to a Tiger Philanthropist makeover feels like a comment to the show's change in direction, or lack thereof in parts. By the end though, I'm not sure what's the big takeaway though, there isn't any mention of the show really needing to change, or an actual acknowledgement of flaws, which is weird as it seemed to be teased.

Still, the episode works and continues to be about letting go of the past, which has been a big part of the season. I don't think it's a funnier, or even better episode than the first wrestling episode, but it's fine, it's here to confirm the growth in the immature teammates of the Crystal Gems. I liked it, but it's on the weaker side of the season for sure.