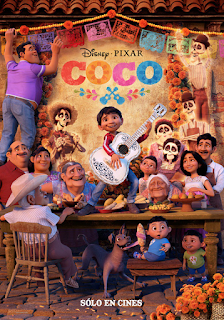 Just give it the Oscar already.


Let's get this out of the way first, no, this is not a rip-off of The Book of Life (a good film in it's own right), if it is, I better see you calling every Christmas film a rip-off. Coco, has had this really stupid backlash for quite some time now, no not all of it is unwarranted (Disney, don't ever try to copyright a culture) but a lot has been. Guys, I get it, The Book of Life was a special movie, made by a Mexican director but why is hating this movie so important? Sure, the director is white, but a lot of the people involved here are Hispanic, this movie's cast is entirely Hispanic (minus John Ratzenberger because of course) this movie is authentic to my people as far as I'm concerned. So if you expected Pixar's The Book of Life, sorry (not really) this isn't that, it's an original, emotional film.

As you've seen in the trailers, this is a movie about Dia de Los Muertos, with the main character, Miguel, (Anthony Gonzalez) trying to become a great musician. After finding out he's related to his idol, Ernesto de la Cruz,(Benjamin Bratt) Miguel decides to run from his family to become a musician, to his surprise though, upon taking a family heirloom Miguel is transported to the Land of the Dead. In this world Miguel meets his deceased relatives, including his great great grandmother Imelda (Alanna Ubach), who was left alone by de la Cruz, thus setting the music ban in motion. With only a limited time available to return, Miguel sets out to find de la Cruz with the help of a forgotten man, Hector, (Gael Garcia Bernal) all to achieve his dreams of fame.

This movie will make you cry, that's a statement that can be attributed to a lot of Pixar films, true, but this one made me cry for far more than just the emotional bits, it made me cry tears of joy over how beautiful it was. I know this isn't the only representation my people have had in Hollywood, but no film has ever captured my culture the way this one did, it almost saddens me that I never received this as a kid, sure I'm not old, but at a younger age this would've hit me so much harder. On the other hand, seeing this now, especially in a year where bigotry is on the news more than it has been in recent years, this film feels more empowering, yes the president believes my culture only brings rapists and criminals, but this film shows we are a culture of beauty, love and respect.

On the technical side of things, this is one of the most visually amazing Pixar films, not just because of the detail, but the art design of the background and creatures is among the most amazing conceived by the studio. I know it's practically a given that any Pixar film will be fully realized visually, after all Cars 3 looked great, but that film didn't really have anything new to truly stand out. This on the other hand provides a unique world, that will live along side the ocean from Finding Nemo, the future in WALL-E, the jungles of Up, the locales of Cars 2 and prior to this, the mind in Inside Out as some of the most incredible settings crafted by the studio.

On the music side of things, there's a lot to like here as it is technically the first musical from Pixar. While the score from Michael Giacchino isn't especially memorable this time out, it's fitting and still nicer than some of his other outings, though the stuff to really look forward to here is the songs. Robert and Kristen Anderson-Lopez have definitely proven to be reliable songwriters for Disney, with Winnie the Pooh, Frozen and now Coco, they are amazing writers and this film utilizes their work greatly, along with that animation Oscar, I better see a song Oscar for this.

Back to the emotion though, while this film has a predictable villain due to Pixar's trend for villains, (no spoilers I promise) this one manages to lead into one of the best third acts for any film under the studio. If you do not tear up throughout the third act of this film, I honestly have to wonder if you have a soul, it is that moving as well as a gut punch. I've cried a lot more in films since I've entered adulthood, this one stands out among that list, by the time we've realized what's actually going on the film essentially says "we're not done with you just yet" and layers some more tear-jerking moments, expect this one to be up there with Carl and Ellie's married life.

It'd be unfair to compare this film to The Book of Life, these are both beautiful films and while this is definitely better, I can acknowledge The Book of Life is still going to feel slightly more special for some out there as the director of that is Mexican and fought hard to make it. Coco is the product of a big budget studio, the product of a white director (unless co-director Adrian Molina had way more input than Lee Unkrich) but it's also the product of a crew that cared deeply about making a heartfelt love-letter to a culture that needs it now more than ever.

P.S. I'd say skip the decent Olaf short in front of this, but given the 20 minute run time of that, I doubt the theater will let you in that late.