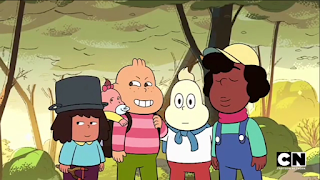 I'm not ashamed to admit it, I laughed nearly every time the kid said "Garbanzo".
I've heard Onion is a pretty mixed character for fans, some like him, others hate him, I'm perfectly fine with him honestly. There's a lot about the character we don't understand, but Onion seems to be a nice weird addition who provides some pretty sad relatable moments all things considered, this episode is no different. Before we get to the plot, I will admit my feelings here might be a bit biased, as going into this I feel about the same as Steven's description, like the lonely kid with no friends.

As the episode begins we see Steven and Onion having fun, Steven narrates the scene as Onion leaves for the day, or rather briefly. Just as Steven was about to relax, Onion gets Steven to follow him, revealing that he does in fact have a group of friends, all as strange as him, as well as named after foods. The gang hangs around, with Steven both enjoying and questioning the activities done (including the group piling in a trench coat to go up to people and flashing... pictures of them), once they ask Steven hurt a bug though, Steven runs off, deciding he wants no part. As he considers his actions, Steven realizes that he may be the boy without friends. Onion comes to Steven, bringing the bug along, leading to Steven realizing Onion's goal for the day was to have fun with all of his friends, before his friends parted ways for the fall.

It's an adorable episode, as well as an emotionally satisfying one. Again, I'll fully admit I've felt lonely throughout the day, so maybe that's why this one hit so well for me, but if a show can make you feel better than it's doing something right. As said before, I find Onion to be a fine character, often times his episodes deal with loneliness, so it feels satisfying to see this episode go deeper into that.

So far the season shows no signs of a major story arc, but I'm loving that this one has been exploring more emotional themes. I still don't feel the show is among my favorites, but for what it's doing, I think it's definitely worth appreciating.