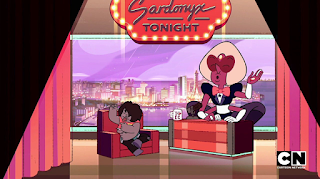 Sardonyx's laugh reminds me of The Legend of Zelda, no really.

Steven Universe is no stranger to the LGBTQ community, this is well known to it's fanbase, so it makes sense we'd get an episode like this. I'll get more into the details in a bit, but this episode is clearly meant to parallel the experience of someone coming out. A minor gripe I had with this episode is that it feels like this should've come sooner, possibly back when Steven first fused. That being said, that the show decided on doing an episode tackling the idea of someone coming out to family members is pretty great and handled respectfully.

As the episode begins, Steven and Amethyst are unsure of how to reveal their secret to Garnet and Pearl, embarrassed, nervous and stressed out, they eventually decide to just get on with it. Garnet, per the norm, is delighted to see the fusion, while Pearl is in utter disbelief, leading to the two becoming Sardonyx. Sardonyx reveals she has her own room, so long as she's around, so she takes Smokey Quartz to it, questioning her on her abilities. The episode then becomes a series of trails of sorts, just to see Smokey's new abilities, clearly making her uncomfortable in the process, until Sardonyx finally accepts the being in front of her as she is.

Again, it's very clear that this is meant to feel like someone coming out to their loved ones, which the episode handles quite well. While they were never gonna have the characters come from the angle of "this is wrong" or "are you sure?" I like that they still present an issue that can come from such a moment. Sardonyx is supportive, but she also falls into the trapping of asking a clearly uncomfortable Smokey why she is special. Throughout the various tests Sardonyx makes (including one that she hilariously assures us that Nicki Minaj will be paid for) she never bothers asking if Smokey wants to do any of it, she just assumes all good fusions can do such things. Knowing a few people who do fall under the LGBTQ community, I'm pretty sure this is a bit similar to the positive reactions they received upon coming out. For so long, moments like these were frowned upon, so a lot of us, sometimes even those who are LGBTQ,  tend to overdo our support, resulting in making assumptions of who they are, or what they do, based on what we know. Again I have no personal experience on this, but I will admit that Sardonyx questioning Smokey reminds me a lot of when people assume I must be an expert on the Spanish language due to my race, ignoring the different dialects, or assuming other positive stereotypes about me and my people, ignoring how rude that sounds when you step back. In the end, this is a love letter to the LGBTQ, support the people in your life who come out, just be aware of how you do that.

This is a wonderful episode for the show to have, it probably should've come earlier, but it still is one of the more touching ones.