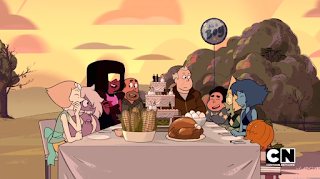 How to please conservative uncles, all the women get married to each other.
Seriously, this show needs to let some episodes run longer than usual as this and the last time it was done are some of the best episodes of the show. This is another laid back episode for the show, but it serves to further push one of the themes of this show, family is made up of the people there for you, as we grow so does family. It's a cute episode that takes full advantage of the longer runtime, which allows the show to fully develop Andy, Greg's cousin.

At the episode's start, Steven visits Peridot and Lapis who have started farming. Peridot finds disappointment that the crop doesn't come to life, but Steven accidentally brings a pumpkin to life, similar to the watermelons, only Pumpkin acts like a dog. The calm moment is interrupted by a mysterious pilot, complaining that his barn is a mess, which eventually brings Greg and the rest of the Gems over. We find out that the man is Andy, Steven's first cousin, once removed, or to make things easier, his uncle. Despite Andy not liking Greg's life style, or that the Gems are all illegal aliens (a phrase I never expected this show to acknowledge), they decide to hold a small feast to celebrate the occasion. It's joyful, but Andy quickly leaves upon seeing how happy everyone is, leading to Lapis and Steven chasing him then, eventually just Steven. The following moment where Andy admits everyone in the family kept changing is touching, it's an acceptance that no matter what, he was being left alone, pushed further away as he refused to grow, which is true for a lot of older relatives in life.

Dave Willis as Andy is definitely a highlight for this episode, playing the character as an almost kid-friendly version of Carl from Aqua Teen Hunger Force. If there's any reason why the performance gets a little too uncomfortable at times, it's that people like this uncle became more prominent this year due to politics sadly and terrifyingly moving that way. Thankfully, the message of the episode, as well as the character's realization makes it that much more likable to sit through this one, plus Andy's growth at least makes him feel more human than your average Trump supporter.

I also liked the introduction of Pumpkin, once again, Peridot and Lapis deserve more screen time, they're always a pleasure to see. The greatest moment of the episode, is seeing the Gems try to be human by performing so many rituals at once, Andy's reaction to that was pleasant. Still, I find myself liking Peridot and Lapis the most here, at least in terms of the Gems.

This is a wonderful episode to watch, once again I find myself asking, why can't more episodes run longer?