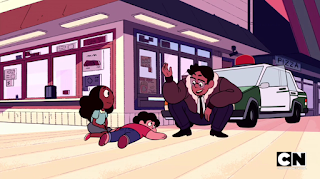 Oh look, Connie's dad.
At first I was dreading this episode, why wouldn't I? The last time we focused on a parent of Connie it wasn't too great, while the plot of it sounded like another filler episode, to my surprise this ended up being pretty enjoyable. To be clear, this isn't a fantastic episode, but once again I found myself enjoying what was presented, as the episode played against my expectations. Connie's father appears much more laid back than her mother, which makes this episode feel a little more unique, despite coming from the same basic set up. The end product wasn't great, but it did leave me a bit more charmed than I thought, which is satisfying.

Steven and Connie are hanging out, a normal day it seems, until Connie's dad shows up, initially pranking Steven. It's revealed that Mr.Smiley wants Connie's father to investigate someone who's been breaking in to his theme park. Connie and Steven join in and the three seem to have a good time, until they notice a sudden break-in. Things get more intense, leading to Connie and Steven believing it may be a new Gem. Connie's father seems unprepared for whatever it is, despite acting quite the opposite, which makes the reveal funny, while leaving him vulnerable, Onion has been breaking in. Connie and Steven cheer her father up as he is saddened by the lack of intense adventures he has, while Onion is left behind, a couple of shadows appearing behind him.

I'll admit, the ending is probably the best part of the episode, the kind of cliffhanger that gives me hope that the season may end with something big. Sure, that final shot doesn't say much, but it appropriately sets up that something evil is coming, and I am pumped. Maybe the arc will be lackluster, but that initial feeling will likely hold up in future viewings.

This is a fine episode, it's nothing spectacular, but it's also left me more positive than the last few episodes have. That I'm pumped to see where the story is heading is a good sign.