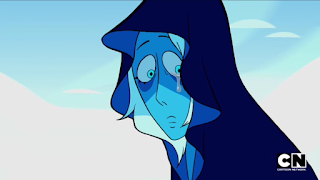 Blue Gem of happiness I see.

And finally, the season begins a story arc, I should be bothered it took this long, but honestly the season has been such a joy up to this point. As with some of the past episodes, this arc seems to be set up as a way to allow Steven to let go of the past, in this case it seems like Rose's murder of Pink Diamond will be the subject. It's interesting, as the show has set up as far back as season one that Rose, may not be the entirely kind being we've been told she was. What Steven may find out in this story will probably not be so nice, but it likely will probably provide more closure, bothered by Rose's actions, but accepting it as part of life.

Once more, Steven sees the world through someone else's eyes as he dreams, crying large tears for some mysterious reason. After a second instance of this, Steven uses the visuals of this mysterious vision to find what exactly he is seeing. Upon realizing that it's a remnant of Pink Diamond, Steven desires to find it even more despite warnings from the Gems, especially Garnet. Without the help of the Gems, Steven turns to his father (with a brief cameo from Uncle Andy) to solve this mystery. After a cute montage, Steven finds the source of his tears, Blue Diamond, who Greg decides to distract to avoid any potential conflicts. Greg manages to relate to Blue Diamond, resulting in his kidnapping, as Blue Diamond wants to keep him as a positive memory of Earth. Ending our episode is a tease of what's to come, a journey into space.

I enjoyed this episode, but I did have one nagging issue with it, what about Peridot and Lapis? It seems the show often forgets about them when it comes to stories like this. I get it, the drama is probably more personal when you keep it to the original group, but it feels like the show would benefit from more acknowledgment of the two. Peridot and Lapis don't have a personal history against Pink Diamond, so why wouldn't they help Steven with this? Granted this probably exists because Greg is the best choice of being kidnapped, but I would like the show to make better use of its cast.

I am very interested in seeing what happens next. I may have some issues with this episode, but what happens in the next few episodes will likely be worth it.