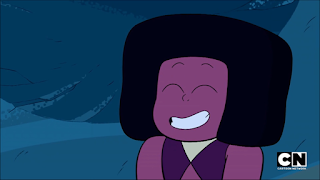 This Ruby is ready to murder you.
So after a full season of the Rubies being in space, one has finally landed on Earth, Navy, Steven's nickname for the Ruby with her gem on the naval area. With Steven being the kind figure he's known to be, we can assume this episode will have Navy become the latest team member, which it is set up to be as such. Steven introduces Navy to Peridot and Lapis, the latter of whom suspects something is up. Navy quickly adjusts to Earth, loving everything that comes her way, which only annoys Lapis even more. After talking things through with Steven and Peridot, Lapis decides to accept Navy, which leads to Steven letting Navy take her old ship for a spin. Right as everything seems to be working towards a brighter tomorrow, Navy betrays the group, revealing a hilarious face that is also somewhat horrifying. As the others are in shock, Lapis is overjoyed in knowing she was right all along.

So this was a pretty neat episode, funny while also clearing up a plot thread, even if I kinda wish it hadn't. See, the thing about the Rubies being stuck in space is that I assumed that would be a running joke for the show, now that it isn't I'm expecting that to go somewhere, but it might not for awhile which is disappointing. I get it, real life isn't always a continuous string of story arcs, but as a show this episode should lead into seeing the consequences of the Rubies acquiring their ship again, but knowing the show the next episode will barely address it. Still, as far as episodes go this one is charming plus I liked seeing how it played out so it's still worth watching.

We're in the final stretch of the season, and while this is my favorite season so far, I can't help but feel like the show is starting to limp as the end nears. Again, this isn't a bad episode and the idea is in the right place, but it's annoying when this show lags on interesting new plot lines that get introduced. A fun sit through, but I have little hope we'll get to see much worthwhile out of the ending this time around any time soon.