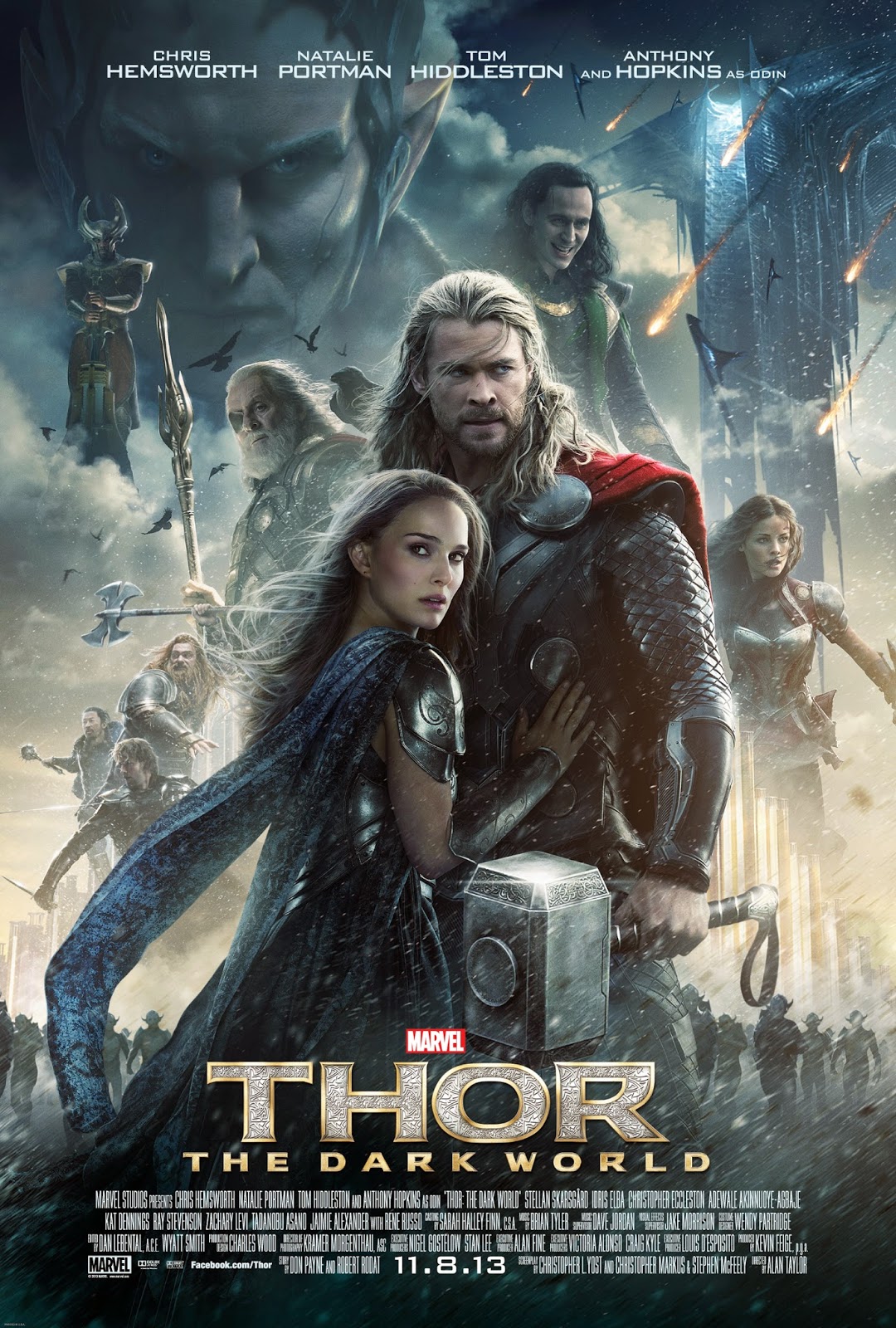 Synopsis-Asgard, as well as the rest of the nine realms are threatened by the Dark Elves, only Thor can stand in their way, but as the problems keep stacking up, Thor, will be forced to team up with an old foe, his own brother.

After The Avengers made Loki a superstar amongst fan girls, Marvel Studios decided to rework Thor:The Dark World, Loki got a bigger part in the film, while the film's villain, Malekith, played by Christopher Eccleston, was downplayed, resulting in a pretty mixed bag. Up till this point, the great thing about the MCU, is that the movies work without having to watch any of the previous films,  this is the film that changed that, viewing of the original Thor and The Avengers feels required. On top of it all, this film had some issues when the original director left due to creative differences, despite that, the film surprisingly didn't end up being a complete mess.

Most of the main cast provide the same caliber of work as their previous appearances, Which is both good and bad. The good comes from Chris Hemsworth and Tom Hiddleston amongst others, providing a lot of the fun that made people love them to begin with, but the bad, well, it's much worse. Kat Dennings is much more annoying this time around, the performance is the same, it's the length that's gotten worse, her role as Darcy was expanded, it's very grating, ruining more moments, then adding to them had she been trimmed, the movie might've been a better one. Malekith also ends up as the worst villain in the MCU, the performance is weak, the motivation is unclear, and to top it off he has so little presence that it's easy to forget he's even in it. Much like the first installment in this series, the characters here are among the weakest, definitely the weakest performances in the second phase of the MCU.

Much of this film breezes by quickly due to the pacing, the great action, and some of the fun banter Thor has with others. Admittedly this is a better film when compared to the original, yet it somehow manages to feel a bit forgettable, with the most memorable moment being the mid-credits tease, a scene meant to tease another film, feeling more memorable then the movie is never a great sign. Despite the unmemorable status of the film, it works, the story itself is a good one, it just felt like parts needed expansion, like the villain, as well as the explanation of the film's McGuffin , while others needed to be downplayed or removed, mainly Darcy.

Thor:The Dark World, is very much like a date with someone beautiful with an average personality,  sure the date will be a nice time, but you might not remember much after the date is over. I recommend watching the movie once, maybe twice, but revisiting it should be very limited, while it's an improvement over it's predecessor, the film still ends up short of being good,  a fun time, but not much else awaits you.