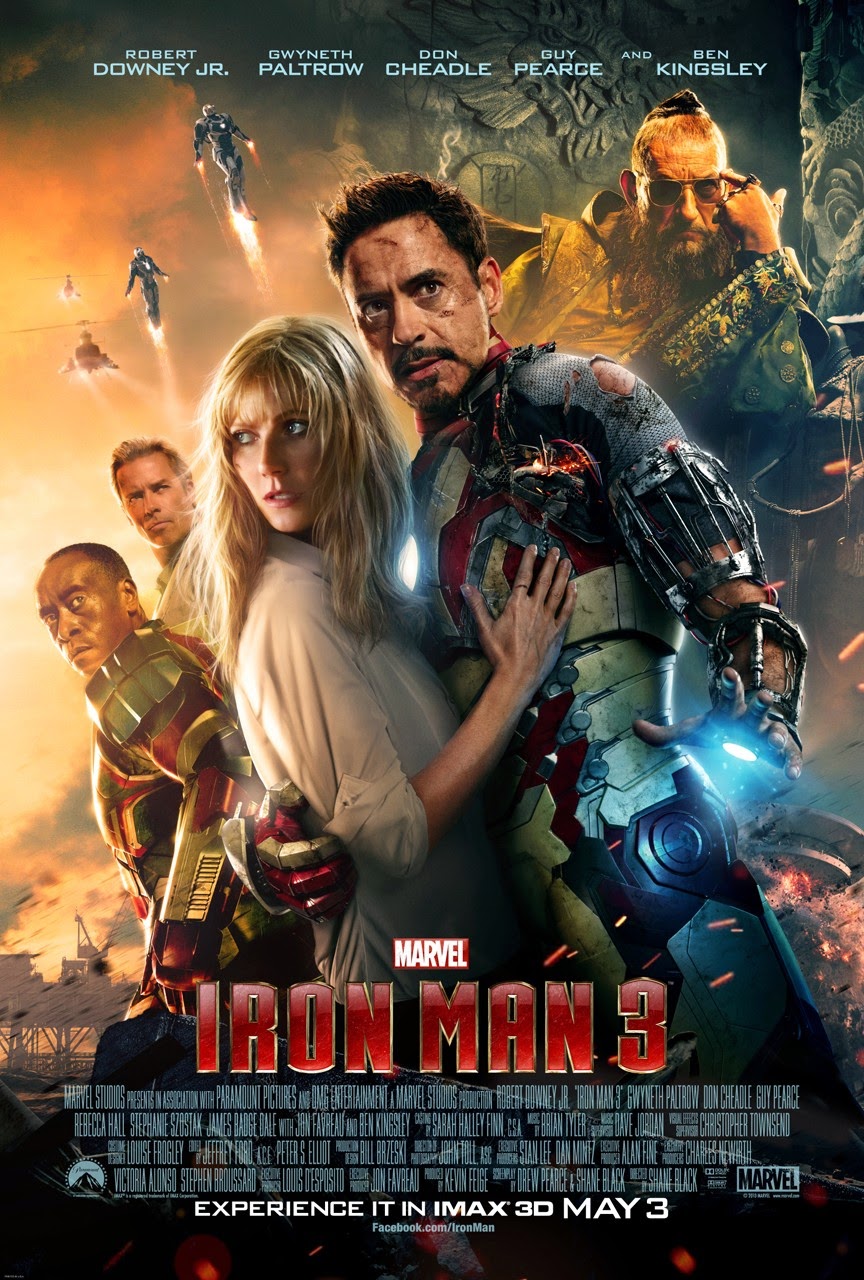 Synopsis- Stressed from his experience with the Avengers, Tony, will find himself struggling to defeat a new terrorist known as the Mandarin, while also struggling to end his obsession with constantly working for the sake of protection.

Despite The Avengers seemingly being the endgame for Marvel's plan, it was only the first step to bigger things. Much like how the first phase for the MCU began with Iron Man, this second phase would begin with a new Iron Man film, Iron Man 3, a much more controversial film compared to the rest of the MCU, at least by the fans standard. I'll try to avoid spoilers for this review, but most fans probably know the "controversy" already, suffice to say, I'm a fan of the twist reveal, it worked for me, and the film was probably stronger with it then without, that being said I perfectly understand the complaints, I just feel more accepting in that regard.

As with the previous films, Robert Downey Jr. really kills it as Tony Stark, the performance is so perfect, I'm sure someday in the future, the Oscars, will look back and regret never giving the man the award he deserves for the role. Gwyneth Paltrow is great as Pepper Potts, finally getting in on the action, yet still remaining as an excellent deflector to Tony's Snark, in many respects, Paltrow, becomes a scene stealer this time around. Don Cheadle returns as Rhodey/War Machine, proving once more that Terrance Howard, while good, was not the actor the character needed, while some may feel bothered about Rhodey taking the Iron Patriot name in this film (in the comics it was associated with Norman Osborn), it makes sense. Ben Kingsley shows up as the Mandarin, giving a great, terrifying performance, that becomes more human towards the film's third act, it's chilling. Despite how some feel towards his third act "humanization", I really enjoyed it, Kingsley is a man of many talents, this film really shows how good he is with that. Guy Pearce rounds out the main cast as Aldrich Killian, a scientist who is a rival to Tony, both intellectually and romantically, trying to woo Pepper away from Tony, he works well in the film, the performance is good, but he's not the best villain for the film, which bothers some with the twist, personally I didn't mind, and hope he returns at some point.

Not much was really negative about this film for me, but there are some issues the more vocal critics have that I will agree with. The previous films featured some great soundtracks, especially in the use of AC/DC songs, this film doesn't have that, at all, and while I wasn't bothered by the use of Eiffel 65's "Blue (Da Ba Dee)", it would have been nice to hear the rock we've come to expect in this series. Big issue number two, is Rebecca Hall as Maya Hansen, she is by no means awful, but felt useless, only there as a way to move the plot a bit, while being nothing more.Aside from those two problems, Iron Man 3 is so good, it even manages to make good use of a child sidekick for the film.

Providing the most chilling story for the Iron Man films, managed to create what I can easily consider as the best of the trilogy, as well as one of the best films in the MCU so far. While the major twist has bothered some, I feel it was right going into this, while also being nowhere near as bad as some make it out to be, while I can respect those who dislike it, I can't imagine how it can be so bad that the whole film is ruin by comparison. This is one of my must watch films in the MCU, as well as one of the best third parts ever made, Iron Man 3 is an amazing political-thriller.