It's Such A Beautiful Day-Beautiful Indeed

*Note:This is a review of the three shorts put together as a film, not just the short itself. 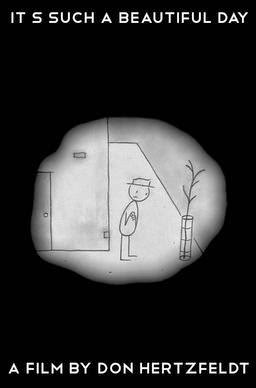 Synopsis-Following the life of a man named Bill, we see the strange, absurd ways he sees the world as his memory continues to fail, as well as his own health.

Don Hertzfeldt united three shorts to create a feature film, and it is one of the most surreal, poignant  films you'll ever witness. It's Such A Beautiful Day, will forever be one of the most underrated, obscure features of this decade, largely due to how hard it is to sell the film to a mainstream audience. While I do consider it to be one of my favorite animated features in recent years, there's no denying that the film will not work for all, the visuals are very unusual, while it's entirely narrated, making for a combo that won't win over everyone, the subject matter doesn't help either. What Don Hertzfeldt manages to create with this film, is one of the most interesting looks into a man's psyche, beautiful, confusing, sad, humorous, and unsure, a spectacular experience for those open to this.

Hertzfeldt has always provided a simple style in his animation, most would describe it as "stick figure" animation, yet his films are always fun to look at visually, this one in particular would be his magnum opus. What makes the animation for this film even more interesting, is that as it progresses, the film implies a lot of symbolism with it, so even without knowledge of Hertzfeld's previous works, the film displays reason, or at least implies reason, as to why everything looks simple. Quite possibly the strangest feat the film achieves, is the narration being solid all throughout, while narration is not itself a bad thing, having an hours worth of it can ruin a film, especially when surreal visuals surround the film, sometimes it's best to let the visuals speak, this film is an exception, the visuals support the narration, and vice versa.

A major part to how this film works, reminds me of art, more specifically paintings, just staring at some fine art will create emotions, thoughts, etc. for people, that is how we judge them, we interpret meanings, which is by no means unique to this film, or even rare, but this film seems to thrive on it. Well Bill seem worthless to you? Or will he remind you of yourself? Or maybe he's a lot like you used to be? The stories of his life may differ from yours, yet there is a lot you can relate with him, Bill isn't a unique man, yet he is, it's all very psychological. I sat witnessing what was going on in front of me, it was beautiful, yet familiar, depressing, at times I felt like the film was giving me advice, while others made me feel ashamed of my own mistakes, while I never cried, I felt the need to, yet could not, it left me fascinated.

Don Hertzfeldt is a master at surrealism, while he may not create the most straight forward stories, there is more meaning found in his work compared to many. It's Such A Beautiful Day is an experience, I'd daresay it's the animated equivalent to 2001:A Space Odyssey,  watch it as soon as possible.