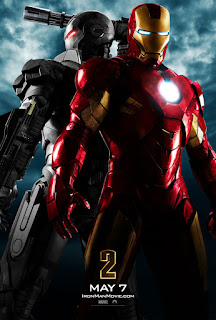 Synopsis-Tony Stark is now known to the public as Iron Man leading him to be confronted with many problems, old family rivalries, business rivals, the military, and worse yet he is having trouble with his personal relationships.

After the success of the first film, a sequel was quickly announced, taking cues from (but not entirely based on) the "Demon in a Bottle" story from the comics, comes Iron Man 2 poised to be a louder and more explosive version of the original, while featuring more bits of teases for Marvel's big, game changing plan.The reaction to this one has mostly been lukewarm, too many teases for The Avengers, so many plot threads, Black Widow was pretty lame, yet I feel a bit different, while it has issues for sure, I'd say it's still better then what the common reaction would have you believe.

A bigger budget meant more suits for Iron Man to wear, much like the comics, we start seeing the variety Tony tends to have on hand,but Tony is joined by antagonist Ivan Vanko, and  Rhodey, both becoming Whiplash and War Machine respectively. The effects added to the suits to make them more believable, as well as make them more threatening, is great, we also see drones appear within the film and much like the people in the suits, they look great. The action here also improves from the original, while the final battle still feels a bit off, in fact more so compared to the original, there is still a lot of worthwhile action scenes throughout the film that work, showing how much director Jon Favreau has improved as an action director. It looks great and the bigger budget is put to good use.

One of the major charms of the first film was the performances, which thankfully this sequel continued to deliver in that aspect. Robert Downey Jr. reprises he's role as Tony Stark/Iron Man which once again he shines in the role and is interesting enough to carry the film by himself. Don Cheadle plays the role of Rhodey this time, and quite honestly he does in fact play the role better than the previous actor, Terrance Howard, which fans may notice his opening line is a response to the cast change. Sam Rockwell plays as antagonist Justin Hammer, a rival weapons manufacturer to Tony, some may remember that Rockwell was in consideration to be Iron Man in the original film and his performance shows, he acts as someone who really hates Tony for taking the spotlight he feels he deserves, he's a ton of fun in the role, which is why I honestly think he should return for at least one more film. Mickey Rourke plays the secondary antagonist of the film Ivan Vanko, son of a former partner to Tony's father who plans revenge through his own advancements in technology with the help of Hammer, he's menacing, playing the part pretty well. Scarlett Johansson plays Natasha Romanoff AKA the Black Widow to comic geeks out there, while not bad, she definitely was not all there at this point.Most of the supporting cast from the original came back, but they don't stand out much this time around, save for Jon Favreau who gets a bigger part here.

This Iron Man film is similar to Spider-Man 2 in that it starts to showcase more of the struggles from being a superhero, the main difference is that this features a very wonky sub-plot about a new element that supposedly cures Tony's problems, honestly the rest of the films drop it, which was a smart choice. With more action this time around, some may feel like the film doesn't have as much heart as the original, which while mostly true, it will still provide a lot of fun moments. One thing that has bugged many was the amount of references to The Avengers, which quite honestlyall things considered was placed fine throughout the film, they just needed to make it feel a bit more important and connected to the main story. Iron Man 2 is louder and busier then its predecessor, but some improvements are made to the film despite the drawbacks, its a sequel that works well, just not as well as the original, how many ever do anyway?