Guardians Of The Galaxy-Came & Got My Love 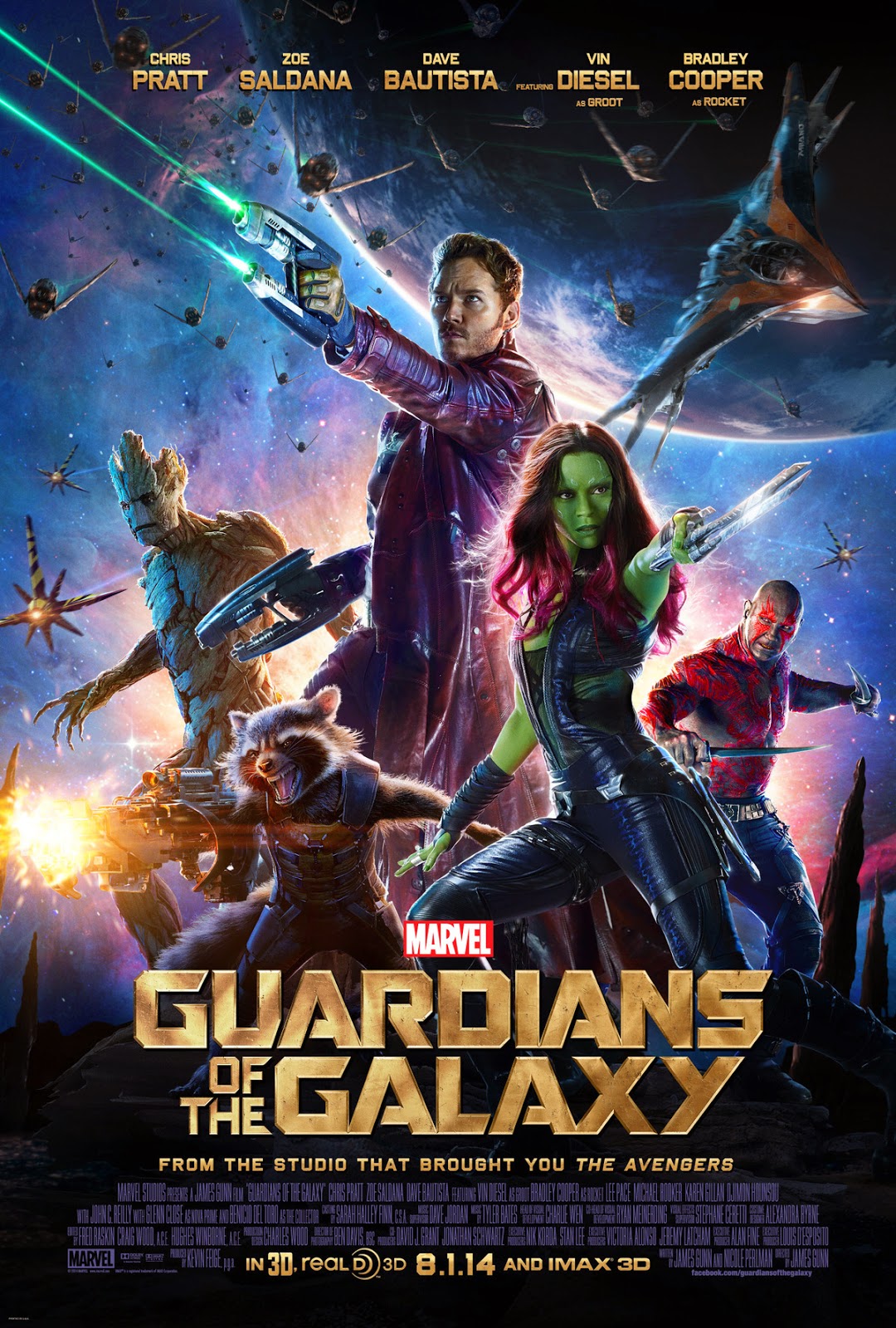 Synopsis-When an orb of unimaginable power falls into the hands of Peter Jason Quill, he'll find himself wanted by one of the galaxy's deadliest beings, shortly after he'll find himself stuck with a band of misfits, together, they'll find the galaxy will need their team to survive... just as soon as they can get out of their own issues with the law.

After tackling a Norse god, a hero draped in the colors of the U.S. and then having multiple heroes on screen at once, Marvel seemed to be able to tackle anything with ease, yet people still had reservations about one area, space. Many naysayers spelled doom for Marvel Studios when they announced Guardians Of The Galaxy, many commenting that an offbeat film so far disconnected from Earth, featuring raccoons, trees and all manner of strange things would make a failure for them, yet it's now the third highest grossing film for the studio, as well as the highest earner that doesn't feature Iron Man. The success can be rationalized in many ways, the unique marketing, the Marvel brand being at it's height, or even the need for Star Wars-esque films, but the best answer is that it's simply the most amazing Marvel film to date, Marvel Studios or not.

Chris Pratt seems to be all over the casting news these days, while the man's certainly been in the entertainment industry for years, a major reason you hear so much from him now is because of how great he is in the film, he's up there with Robert Downey Jr. and Chris Evans for Marvel's best, his performance is really that good. Zoe Saldana does a great job as Gamora, threatening, cunning, and clearly the most mature member of the group, she's a perfect foil to Peter Quill. Drax the Destroyer, essentially the tough guy of the group, at first seems to be nothing more, but due to a tragic backstory, as well as a lack of understanding metaphors, Drax becomes one of the more emotional, yet comedic characters of the film, Dave Bautista pulls the role off with ease. The heart of the "Guardians" comes in the duo of Rocket and Groot, voiced by Bradley Cooper and Vin Diesel respectively, Cooper is hard to notice in the role, he steals the show as Rocket, while Diesel provides a surprising range as Groot, which is even more impressive given the lack of vocabulary the character has. Lee Pace is the main bad guy for this film, Ronan the Accuser, giving a great performance as the deadly Kree zealot, while his main lackeys, Nebula and Korath played by Karen Gillan and Djimon Hounsou, are also great in the film, it'd be great to see these characters back at some point. Much of the supporting cast is impressive, John C. Reilly, Glenn Close, Benicio del Toro as well as many others lend their talents here, making the most of their roles, Michael Rooker as Yondu Udonta, is my personal favorite, very quotable, as well as fun in every scene he's in.

This is easily the most visually interesting Marvel film, the landscapes, the designs of the creatures and aliens are all so interesting to look at, some are even beautiful, I can just stare at the stills of the worlds and locations for hours. A lot of the movie relies on special effects, which isn't surprising considering Rocket and Groot, both are visual marvels (no pun intended) that are among the best CG creations in film, the movement, emotions, and actions rendered on them is amazing. While the combat between characters is not Marvel's best, the space/air battles fully utilize their potential, anytime we see action involving the use of spaceships, the film becomes all kinds of fun, it almost made me feel childlike, witnessing the kinds of dogfights I use to imagine as a kid.

There is no such thing as a perfect film, yet I cannot find anything I disliked about this film, the film's soundtrack and the way it's used is perfect, the story is great, not too complex, yet by no means simple, while the exposition never feels forced. Almost everything that can be an issue, works for me, I simply loved this movie too much too even nitpick it. Perfection may not be possible, but for me, this is as perfect as a film can be, it simply knows what it wants to be and takes advantage of that.

It should be obvious, this is easily my favorite Marvel film, as well as one of my favorite films of all time. Guardians Of The Galaxy doesn't feel like a superhero film, because it's not, it's an epic space opera, easily the most perfect a film of it's kind has been since George Lucas' glory days, Watch it right now and get your love.