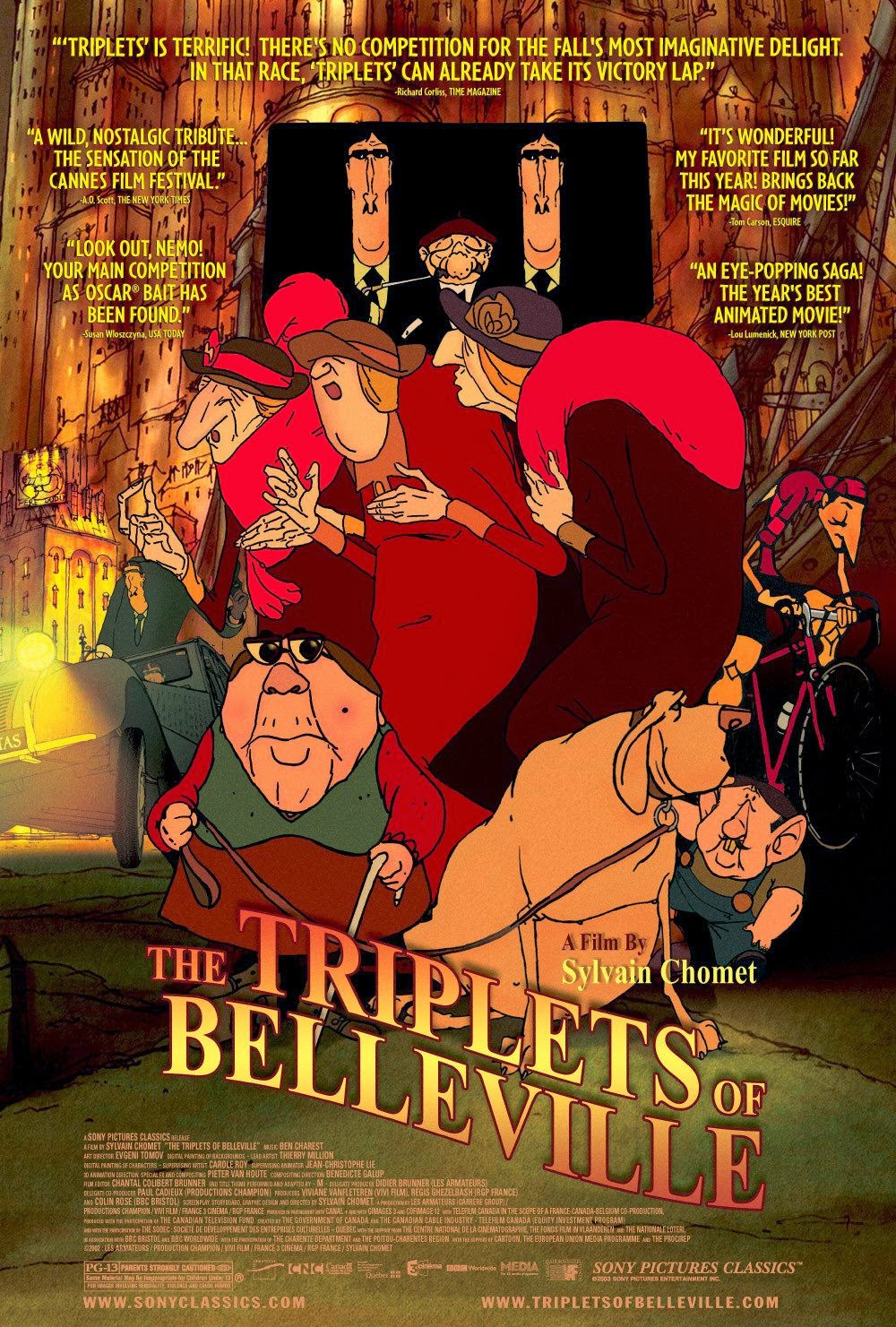 Synopsis- When a trio of marathon bicyclists go missing, it'll be up to an elderly woman to rescue them with the help of a trio of famed actresses, the Triplets of Belleville.

Foreign films have a tendency of being acclaimed by critics, sometimes they really are as great as they're said to be, other times, they unfortunately fall short of the greatness promised. A major factor as to why this film gets praised might be because it's from a different country, we, as a society love being different, we praise anything that feels different from the norm, and the easiest way to be different is to be foreign, where the sensibilities are different from our own, I'm not trying to say this film is bad, it really is good, but as great as critics have hailed it? Hardly, this falls short of expectations, yet I still enjoyed it. The Triplets Of Belleville, takes an interesting approach to tell it's story, but it certainly could've used some work to improve it.

This is a very beautiful film to look at, despite a lot of the ugliness, the motion and style are really impressive, traditional animation truly is a beautiful art form, despite the lack of support these days. A majority of this film lacks dialogue, meaning the visuals are how we learn most of the story, it works, for the most part, but it can be hard to fully understand what's going on at times without looking it up, I, particularly had a hard time understanding the villain's plan for the bicyclists, I had a general idea, but it could've been illustrated in a better way. After looking up what the villain was doing with the bicyclists, I felt like the film could've taken a better route with the kidnapping, the way the mafia uses them felt a bit lackluster, even without fully understanding the plan it felt lackluster, but fully understanding it, made it feel a bit more preposterous. Just a warning for those who can be easily offended, the film does have some ugliness as mentioned before, mainly it's depictions of Americans, any and pretty much every American is displayed as morbidly obese, I personally found it funny, as well as enjoyed the choice, but I understand if some take offense.

If it sounds like I hate the film, I apologize, I enjoyed it a lot, but I acknowledge how the negative things within the film are easier to talk about compared to what works, without going into much detail. I highly recommend all animation enthusiasts watch the film, just be aware that it doesn't live up to the hype the critics have given it. The Triplets Of Belleville is a wonderful film, while not the most amazing, you will certainly enjoy it.